Putin says only Russians believed that Trump would win elections 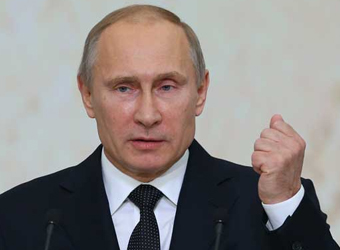 Russia’s President Vladimir Putin praised on Friday  U.S. President-elect Donald Trump’s election victory, saying “nobody believed that he would win except us.”

Putin also praised Trump, saying he had his finger on the pulse of U.S. society, and launched a scathing attack on the Democrats, saying they had forgotten the meaning of their own name and were sore losers.

Speaking at his annual news conference in Moscow, Russia’s president said that only Russia had believed that Trump would become the next president of the United States, but that did not mean the Democrats had the right to blame him for their defeat.

“The current administration and the leadership of the Democratic Party are trying to blame all their failures on external factors,” Putin told reporters.

“(We are talking about) a party which has clearly forgotten the original meaning of its own name,” Putin said, accusing the Democrats of “shamelessly” abusing their status as the ruling party to try to influence public opinion.

“Outstanding figures in American history from the ranks of the Democratic Party would likely be turning in their graves. Roosevelt certainly would be,” he said.

The White House and U.S. intelligence officials have accused Russia of trying to interfere with the U.S. election by hacking Democratic Party accounts. Information from those hacks was leaked online, causing political problems for Democratic candidate Hillary Clinton.

Putin dismissed suggestions Moscow had helped Trump to victory in any way however.

“It’s not like that,” he said. “All of this (the accusations) speaks of the current administration’s systemic problems.”

The question of who hacked the U.S. Democratic party was not important anyway, said Putin, but what the hacks revealed —that public opinion in the United States was being manipulated — was.

“They (the Democrats) are losing on all fronts and looking elsewhere for things to blame. In my view this, how shall I say it, degrades their own dignity. You have to know how to lose with dignity.”

Putin, who spoke positively of Trump before his election win, said that Moscow had believed in his victory.

“Trump understood the mood of the people and kept going until the end, when nobody believed in him,” Putin said, adding with a smile. “Except for you and me.”

Putin addressed Trump’s comments about the need to boost the U.S. nuclear arsenal, saying they were perfectly normal.

Trump’s comments, made in a tweet on Thursday, alarmed non-proliferation experts who said that a boost to the U.S. arsenal could fuel global tensions.

But Putin said he was surprised by the fuss Trump’s tweet had caused and how it had been linked to his own statements about Russia’s plans to modernize its own nuclear arsenal.

“I was a bit surprised by the statements from some representatives of the current U.S. administration who for some reason started to prove that the U.S. military was the most powerful in the world,” said Putin. “Nobody is arguing with that.”