Entertainment
By Administrator On Feb 28, 2012 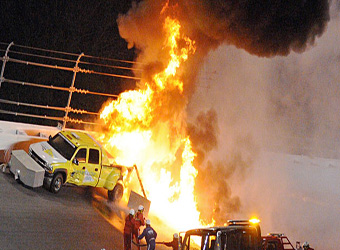 For a sport where speed is king, NASCAR’s Daytona 500 this year was one long waiting game.

First, rain led race officials to pull the plug Sunday — the first time in Daytona 500’s history. Then, continuing showers led them to re-reschedule the start from noon to Monday evening.

When the race finally got underway, a massive fire with 40 laps to go red-flagged it for a couple more hours, pushing the race into a third day.

In the end, Matt Kenseth crossed the finish line about 1 a.m. Tuesday, claiming the 54th running of “The Great American Race”.

The Daytona 500 victory was the second for the driver, who edged out Dale Earnhardt Jr. and teammate Greg Biffle to take the checkered flag.

Those who made it to the end survived multiple accidents, including one on the second lap, and 10 caution flags.

Officials shut down the race for nearly two hours after Juan Pablo Montoya careened into the back of a jet dryer that was being used to blow debris off the track during a caution flag. Montoya’s car, the jet dryer and the truck pulling it all burst into flames and also set a section of the track on fire.

Montoya said he had returned to the race track from pit row before the accident, after having the crew check out a vibration he was feeling in his car.

“I was in fourth gear. I wasn’t even going that fast,” Montoya told reporters. “It just felt really strange and … the car just turned right.”

Some 24 hours of intermittent rain forced Monday’s prime-time start — the first since the inaugural race in 1959.