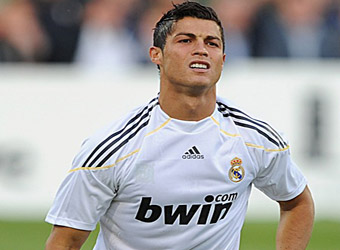 Ronaldo is Real’s leading scorer with 40 goals in all competitions and he has scored nine in his last six outings, including two in their 3-2 win at Real Betis on Saturday.

He netted the opener against CSKA last month when Real were pegged back to a 1-1 draw on the artificial pitch at an ice-cold Luzhniki stadium – a result which ended Jose Mourinho’s perfect start to the competition.

“Ronaldo is mentally very strong, has a burning desire to succeed and is very ambitious,” former Real striker and current director Emilio Butragueno was quoted as saying in the Spanish media.

Only Barcelona has beaten Mourinho’s team at the Bernabeu this season, otherwise they have won every other game.

They lead the European and Spanish champions by 10 points in La Liga with 12 matches left to play, and the two sides remain favourites for a possible Champions League final showdown in Munich.

“In Europe you have to be very careful, you cannot afford any slip ups,” Butragueno warned. “The team is in good form and I hope in front of our own fans we will progress.”

CSKA’s Ivory Coast striker Seydou Doumbia opened the scoring with his league leading 25th of the campaign after just two minutes, before Dynamo came back to level.

“I have to be disappointed with the result as well as the quality of our game,” said CSKA coach Leonid Slutsky.

“We only played at a high tempo for about five minutes, then we allowed our opponents to dominate us,” the Russian international said on his personal website.

“If we play like we did today against Real we will have zero chances in that match.”

With first-choice goalkeeper Igor Akinfeyev and Chile winger Mark Gonzalez still out with long-term injuries, Slutsky was expected to make few changes from the first leg, bringing back defensive midfielder Pavel Mamayev, who missed the Moscow match through suspension.

The Hermès Dressage – Powered by the brand’s first manufacture movement.