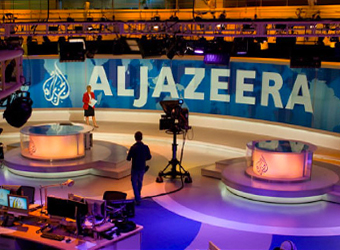 Share
Rights groups and a press freedom organisation renewed calls on Egyptian authorities Friday to release an Al-Jazeera journalist whose detention passed the one-year mark. Egypt accuses the Qatar-based news network of bias toward Islamist groups including its own outlawed Muslim Brotherhood group.

The statements from Human Rights Watch, Reporters Without Borders (RSF) and Amnesty International mark one year since the arrest of Mahmoud Hussein, believed to have been apprehended while in Egypt on vacation. He is accused of publishing false information and belonging to a banned group.

Authorities have arrested several Al-Jazeera journalists since the military ouster of Islamist President Mohammed Morsi, who enjoyed Qatar’s support, in 2013 following mass protests against his one-year rule which proved divisive.

Relations between Egypt and Qatar have been fraught with tension since Morsi’s ouster and the Al-Jazeera network, especially its Arabic service, and its staff has been embroiled in the wider political rift between Cairo and Doha.

In June, Egypt along with other Arab nations severed ties with Qatar over allegations that, among other charges, it supports terrorist groups and uses Al-Jazeera as a mouthpiece to destabilize the region. They demanded Qatar shut down the widely viewed network.

Al-Jazeera’s website is among hundreds blocked in Egypt, including many run by rights groups.

Egypt ranks near the bottom of press freedom indexes. It’s third on the list of the world’s top jailers of journalists, for the second year in a row, according to a report by the Committee to Protect Journalists released earlier in December.