Royal Markle guest-edits Vogue, adds her own flavour in Sept

For the issue titled “Forces for Change” Meghan chose fifteen women to feature; some are celebrities and models known for involvement in activism, like Jane Fonda, Laverne Cox, and Yara Shahidi, while others are politicians and more traditional activists like New Zealand’s Jacinda Ardern and climate-change speaker Greta Thunberg. 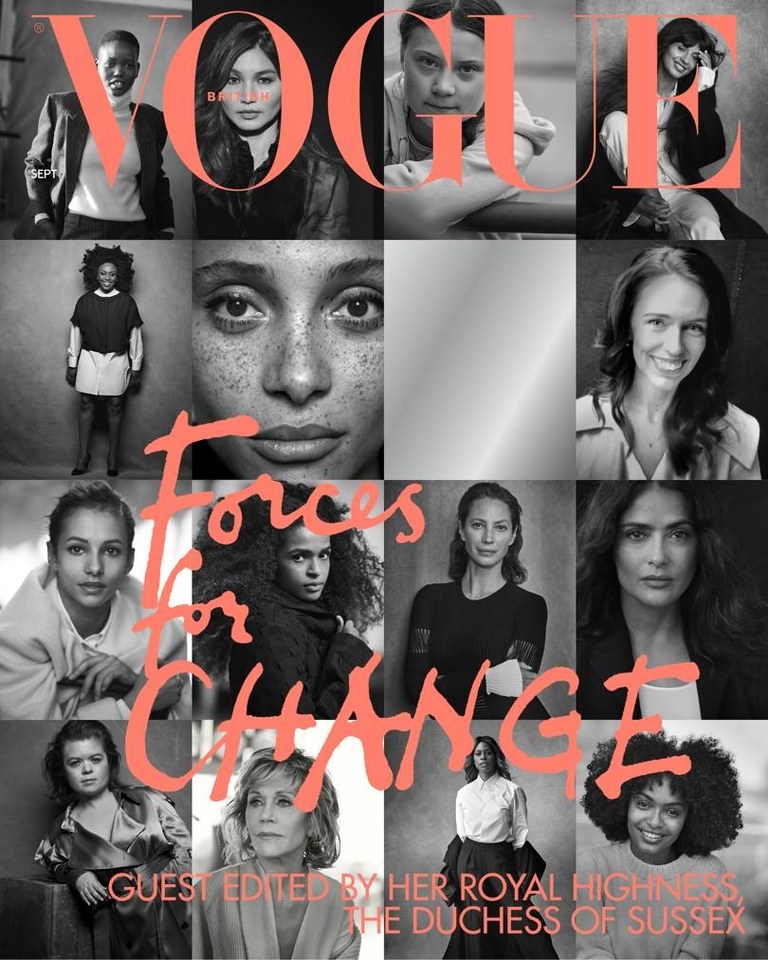 Meghan was hands-on with the cover shoot, even calling the photographer Peter Lindbergh while he was shooting some of the women in New York City. “My instructions from the Duchess were clear: ‘I want to see freckles!’” Lindbergh said.

When Meghan Markle took on the role of guest editor of British Vogue‘s September issue, she was also gearing up to be a first-time mom.

The Duchess of Sussex revealed in her candid editor’s letter that she secretly worked on the project for months, all while preparing for the arrival of her son Archie Harrison, who was born May 6.

“I was about five months pregnant when this process began, and by the time you hold this issue in your hands, my husband and I will be holding our three-month-old baby boy in ours,” Meghan, 37, wrote. “It’s a very special time for me personally, on so many levels; working with Edward and his team, both during my pregnancy and my maternity leave, has played no small part in that joy – it has been a privilege to be welcomed and supported by this amazing team.”

Meghan said she met British Vogue editor-in-chief Edward Enninful for the first time in January to collaborate with her women-focused patronage, Smart Works.

“What evolved over the next hour was a promising pow wow of two like-minded thinkers, who have much in common, including our love of writing,” Meghan, who ran a lifestyle blog called The Tig for years before marrying Prince Harry, wrote. “Over a steaming cup of mint tea, we teased through how one can shine light in a world filled with seemingly daily darkness. Lofty? Of course. Worth it? Without question.”

Meghan also revealed that she came up with the idea of being the issue’s guest editor herself — and she asked Enninful for the job via text.

“So I asked the question,” she wrote. “Actually, I typed and deleted the question several times until I built up the courage to ask the question in question. ‘Edward… instead of doing the cover, would you be open to me guest editing your September issue?’ ”

“The ellipsis… the ‘dot dot dot’ that inspires the greatest practice of patience in this digital era. And then it appeared, EE’s reply: ‘Yes! I would love for you to be my guest editor,’ ” she recalled. “Sitting on my sofa at home, two dogs nestled across me, I quietly celebrated when the words appeared on my screen.”

Meghan said their goal was to create an issue of “both substance and levity,” with features such an interview of Dr. Jane Goodall by Prince Harry and a Q&A about motherhood with Michelle Obama.

For the interview with former first lady Michelle Obama Meghan wrote an introduction in an approachable voice that might be familiar to readers of the Tig. She’s even a little self-deprecating. “I share all this with you as a disclaimer of sorts: had I known Michelle would be so generous in making this a comprehensive interview my questions would have been lengthier, more probing, more engaging,” she wrote. Meghan asked Obama about motherhood, the advice she’s given to her daughters (“Don’t just check the boxes you think you’re supposed to check, like I did when I was their age”), and the story behind her newest non-profit.