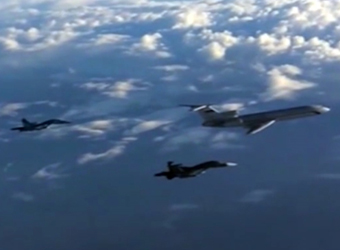 A Russian military plane with 91 people on board has crashed into the Black Sea, Russia’s defence ministry says.

The plane disappeared from radar 20 minutes after taking off from the resort of Sochi at 05:20 (02:20 GMT) and fragments have now been found.

The defence ministry said the Tu-154 was carrying service personnel, members of the famed Alexandrov military band and reporters.

The plane was flying to Syria’s Latakia province.

The defence ministry said in a statement: “Fragments of the Tu-154 plane of the Russian defence ministry were found 1.5km from the Black Sea coast of the city of Sochi at a depth of 50 to 70 metres.”

The performance was scheduled to take place at Russia’s Hmeimim air base, near Latakia.

Russia has been carrying out air strikes in support of Syrian government forces who are battling rebels opposed to Syrian President Bashar al-Assad.