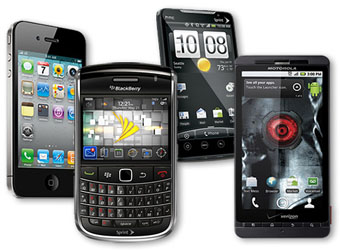 Samsung Electronics posted a record $5.2 billion quarterly profit as it shifted over 20,000 Galaxy smart phones an hour in January-March, outselling Apple’s iPhone in a duel for the lucrative high end of the mobile industry.

“Samsung and Apple are out-competing most major rivals and the smartphone market is at risk of becoming a two-horse race,” said Neil Mawston, an analyst at Strategy Analytics.

CLSA analyst Matt Evans said in a recent report that “Samsung’s smartphone success in the first quarter was the flip-side of Nokia’s disappointment.”

The near duopoly in high-end smartphones is unlikely to come under much threat this year or next, according to Bernstein analysts, and Samsung will look to keep that momentum going next week with the launch in London of a third generation of Galaxy S, hoping to boost sales ahead of the summer Olympics, where the group is among the leading sponsors.

“The Galaxy S 3’s specifications are expected to be sensational and it’s already drawing strong interest from the market and consumers,” said Brian Park, an analyst at Tong Yang Securities.

The new Galaxy will be powered by Samsung’s quad-core microprocessor, which the company hopes to see used in handsets sold by Nokia, HTC and Motorola, as well as Apple, its biggest customer for components.

“We anticipate very strong demand for the Galaxy S 3,” Robert Yi, Samsung’s senior vice president and head of investor relations, told analysts. “When there’s strong demand in the market, we don’t necessarily need to spend a lot of marketing dollars to promote sales.”

While Apple said this week that iPhone 4S sales boosted its quarterly revenue in China five-fold, there are more Samsung handsets than Apple phones in the world’s biggest mobile market. [ID:nL2E8FOGMO] [ID:nL3E8FP59X] Samsung said it increased its China smartphone market share to just above its global average, suggesting it took more than 30 percent share of a market where, unlike Apple, it already has deals with all three big telecoms operators.

Samsung’s quarterly handset division profits nearly tripled to 4.27 trillion won ($3.8 billion), accounting for 73 percent of total profit, and operating margins jumped to 18.4 percent from 12 percent in the preceding quarter on strong sales of the Galaxy S and the Note phone/tablet, the surprise consumer hit of recent months.

In a sign that high-end smartphones are where the mobile action, and money, is, Foxconn International Holdings warned of a deepening first-half loss on weak orders. While its Taiwanese parent assembles iPads and iPhones, Foxconn International mainly puts together handsets for Motorola, Sony and others, indicating a wider gulf between high-end smartphones and other mobile devices.

January-March operating profit nearly doubled to 5.85 trillion won and was up from 5.3 trillion won in the previous quarter, sending Samsung shares to a life high of 1.38 million won ($1,200). The shares closed up 2.5 percent.

Samsung competes with Sony and LG Electronics in TVs, Toshiba and SK hynix in chips and LG Display in flat screens, Reuters reported.