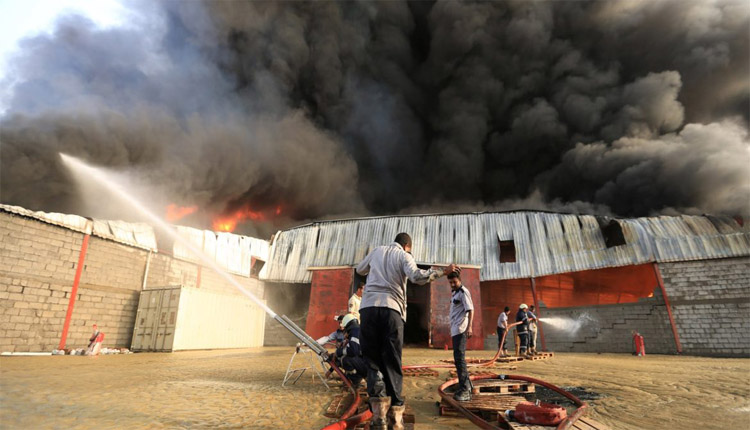 The Saudi-led coalition resumed air strikes on Yemen’s main port city of Hodeidah after a lull on Monday as Western allies pressed Riyadh to end a war that has left the impoverished country on the verge of starvation.

Air strikes against the Iran-aligned Houthis’ fortifications were halted for more than 12 hours on Monday and street battles, which had been raging for a week on the outskirts of the Red Sea city, trapping civilians and endangering hospitals, died down, residents said.

The short lull coincided with a visit by British foreign minister Jeremy Hunt to Saudi Arabia to press for an end to the nearly four-year war that has killed more than 10,000 people.

Coalition spokesman, Colonel Turki al-Malki, said the offensive on the Houthi-held city was still on.

“The operation is still ongoing. It’s not true that there is a ceasefire in Hodeidah,” Malki told reporters in Riyadh.

The Sunni Muslim coalition led by Saudi Arabia and the United Arab Emirates has renewed its offensive on Hodeidah, a lifeline for millions of Yemenis, as Washington and London called for a ceasefire amid renewed U.N.-led peace efforts.

Western governments that support the coalition with arms and intelligence have toughened their stance on Yemen after the murder of journalist Jamal Kashoggi at the Saudi consulate in Istanbul on Oct. 2 sparked a global outcry and opened Riyadh to possible sanctions.

French Foreign Minister Jean-Yves le Drian said there could be no winner in the war and it was time to cut losses.

“It’s a dirty war. The international community needs to say that’s enough. That’s what the U.S. says, we’re saying and the British too,” he told France 2 television.

The conflict is seen as a proxy war between Riyadh and arch foe Shi’ite Iran.

The U.N. humanitarian coordinator in Yemen, Lise Grande, told BBC radio she welcomed the easing in battles as a positive sign, especially for trapped civilians who are “absolutely desperate”.

Another U.N. official told Reuters there are some positive signs that the warring parties are moving toward de-escalation as the United Nations tries to resume peace talks that collapsed in September when the Houthis failed to show up.

The fighting has already disrupted services in May 22 hospital in the eastern suburbs and forced medical staff and patients in al-Thawra Hospital, the region’s main medical facility, to flee the complex on Sunday.

“Hundreds of medical workers and patients, including a malnourished woman carrying her daughter in a surgical robe and a man still hooked up to a catheter, fled in terror as a series of large explosions rocked a hospital (al-Thawra) in central Hodeidah,” Amnesty International said, quoting a witness.

Another medical worker who was inside the hospital at the time told Amnesty that hundreds of patients and staff dodged a “hail of shrapnel” as they fled in panic.

International medical charity Médecins Sans Frontières (MSF) said it treated 134 wounded from the fighting in Hodeidah, including 14 women and 24 children since Nov. 1.

Hodeidah is an entry point for 80 percent of the impoverished country’s food imports and relief supplies. The United Nations has warned that any disruption to the port risks triggering a famine.

The coalition intervened in the war in 2015 to restore the internationally recognized government ousted by the Houthis, who control populous areas of Yemen including the capital Sanaa.

Riyadh and Abu Dhabi say wresting control of Hodeidah, the Houthi’s main supply line, would force the group to negotiate.

The coalition had abandoned an earlier offensive on the city in June without any gains amid international concern about a humanitarian catastrophe to give peace efforts a chance.

U.S. senators alarmed if China gets control of Djibouti port