Saudis’ renting out to illegals put tenants in a fix 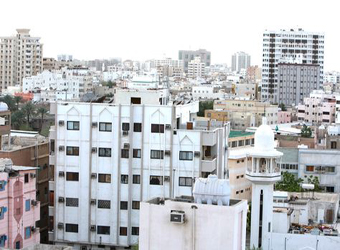 The tendency on the part of some landlords to rent out annex rooms meant for drivers at their residential buildings to illegal residents has become a growing phenomenon in various parts of Jeddah, according to a report in Al-Madinah newspaper.
According to the Arabic-language daily, a number of Saudi tenants had urged the authorities to crack down on this phenomenon, as it had become a potential threat to them.

Nasser Dahlan, a tenant, said that several illegals had been given shelter at the building complex he lives in. “There are 10 annex rooms for drivers in the building, and illegal foreigners occupy all of them. The landlord is keen to lease them rooms, as they give him a higher rate of rent,” he said, adding that these illegal residents posed dangers to other tenants and put them in an uncomfortable position.

Dahlan drew attention to the fact that many landlords resort to this practice. “Landlords are eager to earn money at any cost and not at all bothered about who the tenants are,” he said.

Several citizens who owned residential apartments under the lease-and-own scheme also rent out their apartments to illegal foreigners at a higher rent.

Commenting on the issue, Abdullah Al-Ahmari, chairman of the real estate committee at the Jeddah Chamber of Commerce and Industry, attributed this phenomenon to the absence of any precise provisions in the law governing rent ending in ownership scheme. “There are no provisions in the law that enables the Saudi Real Estate Investment Company to prevent recipients of residential apartments under the scheme from sub-letting them to illegal residents for higher rents,” he said.

Lt. Col. Muhammad Al-Hussein, spokesman of the Passport Department in Makkah, said his department would take penal action against landlords who rent out their residential apartments to illegal residents. He noted that the Labor Office is the authority handling matters related to legal residents in the Kingdom and not his department.

“We are dealing with cases of only those foreigners who do not have a valid residence permit (iqama). Our patrol teams, in coordination with the concerned agencies, carry out raids to catch illegal residents and take appropriate punitive measures against them,” he said.

Al-Hussein warned that landlords who give shelter to illegal residents would face penal action, including jail term, and the tenants would be deported.

Ali Al-Suwailem, member of the lawyers committee at the Riyadh Chamber of Commerce and Industry, said some foreigners are engaged in cover-up business in violation with the Labor Law. He said the phenomenon of cover-up business is instrumental in spurring unemployment among Saudis, in addition to a huge increase in the transfer of money by foreigners. “These people transfer their profit to their respective countries without spending it in the Kingdom, and their revenues are not helpful to the Kingdom in any way. There are several factors for flourishing this illegal activity, such as the apathy on the part of some Saudis to do certain trades and lack of awareness among them about the dangers of cover-up business,” he said.

According to Al-Suwailem, there are four major negative factors for cover-up business. These include unhealthy competition posed to Saudi owners of small and medium enterprises (SMEs), increasing cases of commercial fraud, and earning of huge profit by those engaged in cover-up business at the expense of consumers. These foreigners are free to do business under the cover of some Saudis and they need not secure an investment license by spending any amount of money, he added.