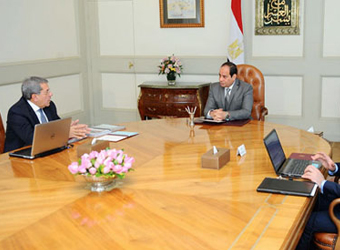 Egypt’s President Abdel-Fattah El-Sisi met on Sunday with Finance Minister Amr El-Garhy in Cairo where they discussed recent economic reforms, their results and economic development, the presidency said in a statement.

According to the statement, El-Sisi discussed in his meeting with El-Garhy the ministry’s evaluation of the financial performance – and important economic indicators — of 2016 and 2017.

“The minister presented to the president a report about the latest developments in Egypt’s economic situation as well as reforms of economic policies and what the finance ministry has achieved in recent months, the statement read.

“Minister El-Garhy explained in the meeting that the economic reforms that were undertaken by the government in the past few months have had a positive effect on the international evaluation of the Egyptian economy.”

El-Garhy said the Egyptian economy improved noticeably and that in “most of the international economic ratings, corporations praised the decisions and procedures taken by the government.”

The presidency added in its statement that El-Garhy told the president that his ministry was looking forward to seeing the results of the economic reforms in Egypt through strong direct foreign investments.

In 2014, Egypt embarked on a plan to introduce a number of fiscal reforms, including fuel-subsidy cuts, as well as imposing new taxes to ease a growing budget deficit.

In early November, Egypt’s central bank decided to freely float the pound and raise key interest rates as part of a set of reforms aimed at alleviating a dollar shortage and stabilising the country’s flagging economy.

Egypt’s economic growth rate registered 4.3 percent of GDP in the fiscal year 2015/16, down from 4.4 percent in the previous year.

Obama: US presidency is not family business