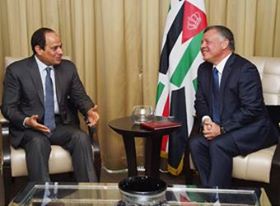 The visit comes within the framework of close relations between the two brotherly countries and the two political leaders’ eagerness to push forward political, economic and social bilateral relations to achieve their two peoples’ common interests, as well as to exchange views on regional and international issues of common concern.

Sisi will hold a summit on Wednesday with King Abdullah II, informed sources said on Wednesday.

The meeting will discuss means of enhancing bilateral relations, as well as Arab and international efforts toward achieving peace in the Middle East, before the American Islamic Summit, which will be held by US President Donald Trump in Riyadh next week. Arab leaders including Sisi will attend the summit.

Sisi and Abdullah will discuss regional issues of mutual interest, including the Syrian crisis, and the situations in Libya, Iraq and Yemen, and the political efforts exerted by the international community to confront terrorism worldwide, the sources mentioned.