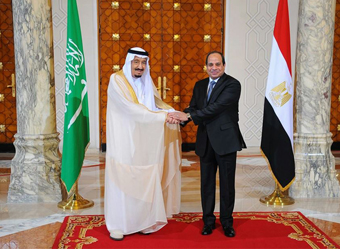 Egypt’s President Abdel Fattah al-Sisi and Saudi King Salman stressed during talks in Riyadh on Sunday the need to preserve the security and stability of Arab states and to combat attempts to drive a wedge between Arab allies, Egypt’s state news agency MENA said.

President Sisi landed in the Saudi capital Riyadh on Sunday for a visit to boost ties after months of apparent tensions between the two Arab allies. The Egyptian presidency said Sisi’s visit came in response to an invitation by King Salman last month when the two leaders met on the sidelines of the Arab League Summit held in Jordan.

The two Arab leaders said they look forward to enhancing cooperation between their countries to face challenges and restore security and stability in the region, referring to the civil conflicts in Syria, Yemen, and Libya.

The official Saudi Press Agency said the talks between Sisi and Salman “reviewed the strong and brotherly relations as well as cooperation between the two countries” and recent developments in the region.

Earlier on Sunday, the Egyptian presidency said in a statement that Salman and Sisi would discuss “regional and international issues of common interest” and that the “fight against terrorism” in the region would top their agenda.

On Friday, Egyptian Foreign Minister Sameh Shoukry said the visit would also be a good opportunity to discuss international and regional developments in light of the new US foreign policies under the Trump administration, especially after Sisi’s recent visit to Washington.

Tensions between Saudi Arabia and Egypt grew last year when an agreement between the two countries to transfer ownership of two Red Sea islands to Saudi Arabia was met with protests and lawsuits in Egypt.

Some reports have suggested that the two countries also differ on their stances on how to reach a resolution to the Syrian civil war.

There has been speculation that the reported row over Syria stems from Riyadh’s conviction that Syrian President Bashar Al-Assad must be removed to put an end to the country’s six-year civil war, while Cairo advocates a political solution that denies Islamist militants any future role in Syria.

However, officials from both countries have repeatedly emphasised the close ties between Egypt and Saudi Arabia, denying the existence of tensions or disagreements.