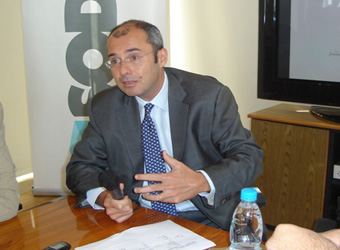 Sodic won the award of the best future project that serves the increasing demand on administrative units as well as the commerce and retail department, during the Cityscape – Next Move exhibition that took place on 20 – 23 February.

This distinctive award is handed to the best administrative and retail units’ project, according to international standards and foundations that are difficult to achieve.

Sodic’s pavilion, situated on 365 meter square, was distinguished with elegance, simplicity and luxury; the thing that led to audiences’ interactions and reflected Sodic’s international vision on the real estate department.

Sodic’s pavilion witnessed a remarkable visiting activity from audiences that expressed their admiration of the projects and accomplishments achieved by Sodic throughout their history, especially in 2011 when they executed projects worth of one billion pounds.

Maher Maksoud, Vice President of the company, expressed his delight to obtain this valuable award, stating that: “this award reflects the commitment of Sodic to provide commercial and real estate solutions according to international standards whether applied in the execution or delivery process in a form that ensures total satisfaction of our clients and matches their needs, reflecting Sodic’s commitment to their clients, promoting the Egyptian economy”.

He stressed on the importance of “Cityscape/ Next move” exhibition, being the most significant event in the real estate investments’ field in Egypt, where it attracts major companies operating in this sector, benefiting the client and promoting economy in general.

He added: “we were successful in displaying our company’s ability to fulfill its obligations, with the diversity of its projects, whether real estate or commercial such as: Allegria, The Polygon, West Town residence, Kattameya Plaza and Designopolis.