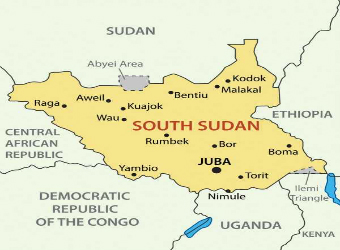 South Sudan’s rebels on Saturday said they had wrested control of Pagak, their stronghold town near the country’s border with Ethiopia, from government forces, a day after launching an offensive to drive them out.

Formerly controlled by the rebels, the town was captured by South Sudan’s military five days ago but heavy fighting erupted on Friday with rebels vowing to retake it.

“We took control of Pagak…government forces are not in Pagak, we have pushed them out,” rebel spokesman Lam Paul Gabriel told Reuters.

Dickson Gatluak Jock, spokesman for South Sudan’s Vice President, Taban Deng Gai, denied the military had lost Pagak but said they had lost three soldiers in the fighting while four were wounded.

“We clashed with them (rebels) yesterday in Pagak but we are in full control of the area,” he said.

Fighting had died down on Saturday, he said, but acknowledged the rebels “are not very far from our area.”

Pagak is a major town on a road connecting South Sudan to Ethiopia. Rebel control of the town allows them easy cross-border movement and smuggling of weapons and other supplies from Ethiopia. The government is also eager to control it so that it can block rebel access to resources.

South Sudan descended into civil war in 2013, only two years after it won independence, when President Salva Kiir fired his deputy, Riek Machar, unleashing a conflict that has since splintered along multiple ethnic lines.

Machar has been under house arrest in South Africa since December as regional leaders try to bring about an end to the conflict. The rebels fighting government forces in South Sudan remain loyal to him.

Jock said the military had killed five rebels during Friday’s fighting but the insurgents denied the claim.