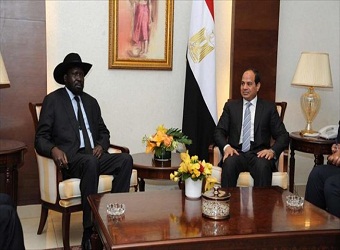 South Sudan’s President Silva Kiir praised on Tuesday President Abdel-Fattah El-Sisi’s and the Egyptian government’s support for the reinstitution of stability in his country, calling on rebel groups to stop weakening his country’s government.

Kirr’s comments came during a press conference that was held at the presidential palace in Cairo after a meeting between El-Sisi and Kirr to discuss bilateral relations.

The South Sudan president also praised several development projects implemented by Egypt in his country, adding that around six thousand South Sudanese nationals are currently living and studying in Cairo.

Kirr arrived in Cairo on Monday for a three-day visit to hold talks with his Egyptian counterpart and other officials.

The central African country has been gripped by civil war since Kiir sacked Riek Machar as vice president in 2013.

More than 10,000 people have been killed and over 2 million displaced, many of whom have fled to neighboring Uganda, Ethiopia, Kenya and North Sudan.

A UN Security Council resolution in December 2013 authorised the deployment of a peacekeeping mission to the country, comprising 12,500 troops from twenty countries, including Egypt.

Egypt has more than once expressed support for a peace agreement in South Sudan.

In July 2016, a ceasefire was signed between President Kiir and Machar after four days of intense gun battles that killed at least 300.