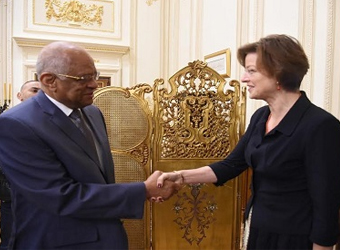 The delegation, led by chairwoman of the Dutch parliament’s foreign affairs committee Angelien Eijsink, met with El-Sisi earlier on Tuesday where they discussed Egyptian-Dutch bilateral relations, according to the Egyptian presidency.

The president also discussed with the Dutch parliamentarians the possible ways of benefitting from Dutch experience in several fields including education and agriculture. The meeting was attended by Egypt’s foreign minister Sameh Shoukry.

The delegation was also briefed on a number of issues including terrorism, the construction of churches in Egypt, the new NGO law and the country’s economic reforms, according to a statement issued by the House speaker’s office.

According to the statement, the speaker told the Dutch delegation that Egypt is living in a region ravaged by terrorism and civil wars.

“As the Middle East has become a hotbed of civil wars and sectarian strife, the role of Egypt in fighting terrorism has become more important and vital,” said Abdel-Aal.

“The first is aimed at fighting illegal migration by stiffening penalties on gangs [involved] in trafficking human beings,” said Abdel-Aal.

He also said that a new NGO law was also passed to achieve two objectives; tightening control on foreign money so it is not used fund terrorist acts, and obliging NGOs to be transparent in revealing their sources of funding.

“Egypt’s new NGO law is also a European-style legislation that allows NGOs to act freely while making sure that they do not play a role in funding terrorist activities,” said Abdel-Aal.

Abdel-Aal also praised parliament’s approval of a new church building law as a great step towards strengthening the principle of citizenship.

“This law, for which Egyptian Coptic Christians have waited 160 years, helps better facilitate the building of churches, not to mention that it shows that the Egyptian state is serious about reinforcing the values of citizenship and national unity,” said Abdel-Aal.

“We hope that these reforms, which parliament supports, will put Egypt’s economy on a sound track,” said Abdel-Aal.

Abdel-Aal recommended that the Dutch parliamentary delegation exert pressure on the government of the Netherlands to change its guidelines on travel and tourism in Egypt.

“Egypt has become more secure, and as a result these guidelines should change to reflect the stability in the country and not prevent Dutch citizens from visiting Egyptian tourist destinations,” said Abdel-Aal.

In response, the Dutch ambassador in Egypt told Abdel-Aal that the Dutch government has never issued a ban on tourism to Egypt.

“We admit that security conditions in Egypt have largely improved in the last two years,” said the ambassador.

However, he added that “from time to time, the government of the Netherlands opts to advise its citizens not to travel to certain areas which are far from tourism centres in Egypt.”

According to the statement, the chairwoman of the Dutch parliament’s foreign affairs committee strongly denounced the bombing attack on a church in Cairo last month.

Eijsink also thanked Abdel-Aal for “the warm reception” she and her fellow MPs received in Egypt’s parliament.