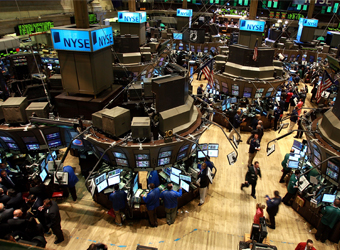 “We’re taking a breather from last year’s Trump trade,” said Luke Bartholomew, investment manager at Aberdeen Asset Management. “The question is whether the rally holds or unwinds as we get more details” about President-elect Donald Trump’s policies.

The Nasdaq composite advanced around 0.5 percent and recorded its sixth record close of 2017. The S&P 500 gained 0.2 percent, with financials rising 0.5 percent to lead advancers.

For the week, the Dow and S&P posted slight declines, but the Nasdaq rose nearly 1 percent.

“Short-term momentum continues to weaken as the major indices move sideways,” said Katie Stockton, chief technical strategist at BTIG, in a note to clients. “The upper boundary of the consolidation phase [in the S&P] is near 2278, and the lower boundary is near 2250. A breakout or breakdown above or below these levels is likely to determine the next tradable move for the market.”

JPMorgan Chase, Bank of America and PNC Financial all reported better-than-expected profits, but only JPMorgan exceeded revenue estimates. Another company that reported quarterly results on Friday was BlackRock, the largest asset manager in the world. The firm posted better-than-expected profits, helped by lower expenses and a rush into low-cost exchange-traded funds.

“Estimates [for banks] were going up ahead of these releases with expectations of higher interest rates and fiscal stimulus. Overall, I think these are some pretty good numbers,” said Nick Raich, CEO of The Earnings Scout.

The SPDR S&P Bank ETF (KBE) rose 1.1 percent, helping lift the broader financial sector. “Banks are one of the best-positioned industries because of rising interest rates,” said Maris Ogg, president at Tower Bridge Advisors. “You expect them to report good earnings, and they have been.”

“The financial sector has been Wall Street’s darling since the election,” said Joe Sowin, head of global equity trading at Highland Capital Management. He added that he thinks this earnings season more investors will rotate out of exchange-traded funds and into individual stocks. “That’s why I think this earnings season is very important.”

The Earnings Scout’s Raich said he would be paying close attention to quarterly results within the energy sector, following U.S.oil’s massive 45 percent rally last year. “When they start reporting, the question will be can they live up to those loft expectations that have been baked into those stocks,” he said.

“The upcoming president is determined to create more jobs for Americans and also inflate the wage growth number. This surely will help the US retail sales number in the coming months, if he delivers what he has promised,” Naeem Aslam, chief market analyst at Think Markets in London, said in a note.

Other economic data released Friday included December consumer sentiment, which came in slightly below estimates and business inventories, which rose 0.7 percent in November.

U.S. Treasurys fell on Friday, with the benchmark 10-year note yield rising to 2.393 percent, while the two-year note yield advanced to 1.197 percent. The U.S. dollar rose slightly against a basket of currencies, with the euro near $1.064 and the yen around 114.55.

About nine stocks advanced for every five decliners at the New York Stock Exchange, with an exchange volume of 744.52 million and a composite volume of 3.035 billion at the close.

The CBOE Volatility Index (VIX), widely considered the best gauge of fear in the market, traded near 11.3.