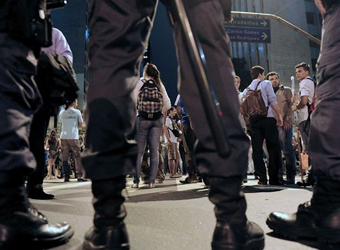 Brazil’s biggest city confronted a second straight day of commuting chaos on Friday, as striking subway workers and a protest over housing conditions tangled the streets of Sao Paulo less than a week before it hosts the opening match of the World Cup.

Police used tear gas to break up a demonstration blocking access to one metro station, but a third of the city’s subway stops remained closed early in the morning. More than 200 kilometers (125 miles) of traffic choked city streets.

The strike already set a record on Thursday for morning gridlock in Sao Paulo this year and snagged several FIFA officials in over two hours of traffic as they arrived for a conference ahead of the World Cup.

Logjams could also complicate access to Brazil’s final test match before the tournament, a friendly against Serbia in the Morumbi Stadium on the city’s leafy west side.

World Cup organizers have urged soccer fans to use public transportation to stadiums on game days at 12 host cities, but just a fraction of the transportation projects promised for the tournament have been delivered.

Frustration with those broken promises and the ballooning cost of new World Cup stadiums contributed to widespread protests that drew over a million Brazilians into the streets during a warm-up tournament last year. The government is braced for another wave of demonstrations, but protests so far this year have lacked the spontaneous energy and scale of 2013.

Instead, the largest demonstrations have been from homeless groups and striking workers using the backdrop of the World Cup to press their causes. Protests directly against the tournament have been marked by flashes of violence between police and hardline “black bloc” protesters, eroding popular support.

A judge is expected to weigh the legality of the metro workers’ strike on Monday.