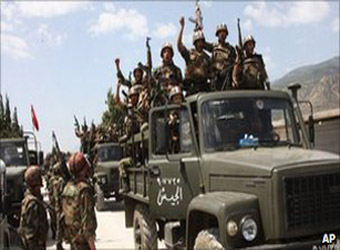 The Syrian army and Iranian-backed militias backed by Russian air power stepped up a military campaign against rebels in eastern Hama province in a push towards the rebel stronghold of Idlib province in northwestern Syria, rebels and witnesses said.

They said dozens of aerial strikes believed to be conducted mainly by Russian jets in the last 48 hours hit opposition held villages and towns in the northeastern Hama countryside and the southern part of Idlib province.

The Islamist Hayat Tahrir al Sham and some Free Syrian Army (FSA) rebel faction in control of these areas said they were sending reinforcements to seize back a string of villages in the northeastern Hama countryside, near the town of Rihjan, that the army had earlier announced were captured in heavy fighting.

The army said the villages of Um Turayka, Bilil, and Rujum al Ahmar were seized, forcing the rebels to flee to areas close to the administrative boundaries of Idlib province.

The Syrian army had lost the strategically located Idlib province to insurgents when the provincial capital fell to rebels in 2015. It has since become the only province that is fully under opposition control.

The Syrian army’s first goal was to retake strategic Abu al Dhour military airport, one of the largest airports in the north of the country that fell to rebels in 2015. It was heavily bombed on Sunday, a rebel source said.

“The regime movements seek to besiege Idlib province with the help of Shi‘ite militias fighting with them,” said Colonel Mustafa Bakour, a commander in the Jaish al Izza rebel faction.

Tahrir al Sham, which is spearheaded by the former al Qaeda branch in Syria, is the main rebel force in the province, raising fears among civilians and rebels alike that Moscow and the Syrian army and its allies would soon turn it into a major battlefield.

The strategically located province that borders Turkey is part of the Russian-led de-escalation zones that seek to shore up ceasefires in western Syria.

Idlib has been a haven for tens of thousands of rebels and civilians who were forced to abandon their homes in other parts of western Syria that the government and its foreign military allies have recaptured from rebels.

It has already been the target of intensive strikes by the Russia and Syrian air forces in the past year that have killed thousands of civilians and destroyed hospitals and civil defense centers.

Tahrir al Sham also repelled simultaneously an offensive by Islamic State militants who have been for the last few weeks pushing into the opposition-controlled territory to extend a small enclave they have in that area, among the few they retain across Syria.

The ultra hardline militants also seized a string of villages that brought them within kilometers of Idlib province.

The Russian and Syrian army advance towards Idlib is also piling pressure on Turkey which had since October begun a major military deployment in the province it considers within its sphere of influence.

Ankara’s intervention seeks to rein in Russian strikes and prevent Idlib from facing a similar fate to Mosul or Aleppo, according to a senior rebel commander briefed on Turkish policy.