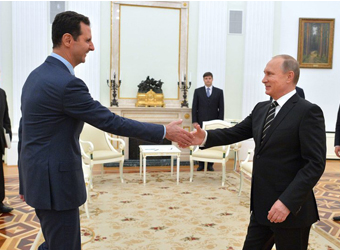 Russia has been urged by the Syrian opposition to salvage the UN’s peace talks in Geneva this week by persuading the Syrian government delegation finally to begin direct face-to-face discussions.

Basma Kodami, a leading member of the Syrian opposition negotiating team, urged the Russians to show they wanted to capitalise on the end of military operations in Syria by building a lasting peace.

The opposition was not seeking President Bashar al-Assad’s removal from office as a precondition for talks, she said, but his departure remained its objective. She said she could not see how Assad could ever be regarded as a legitimate candidate in freshpresidential elections overseen by the UN.

Kodami said she believed Russia was putting pressure on the Syrian government delegation to negotiate seriously at Geneva in what is the eighth round of painfully slow talks.

On Monday the government delegation returned to Geneva for a meeting with the UN special envoy Staffan de Mistura. It had left the city prematurely last week, claiming there was no point talking to an opposition that demanded Assad’s withdrawal, a stance that prompted De Mistura to warn he would judge this week whether any party was seeking to sabotage the process.

In a sign that Syria is under some political pressure from Moscow, the Russian foreign minister, Sergei Lavrov, said: “The parties must begin direct talks on issues of a new constitution and preparations for elections.”

Russia officials have suggested the Sochi talks might lead to a more representative opposition than the negotiating team sent to Geneva.

Kodami warned: “If Sochi is to support the UN process, it can be considered, but there is absolutely no clarity on what the Russians want to achieve. As a substitute for the UN it is a non-starter for us. We will not consider that in any shape or form.”

She also urged the west not to leave the peace process to Russia: “The vast bulk of Syrian refugees in Europe will not return to Syria unless the country is safe. That does not mean no bombs falling from the sky, but a a country free from fear.”

It is not clear whether Vladimir Putin underlined the message when he briefly visited Syria on Monday for a meeting with Assad, where he claimed a military victory and announced a partial troop drawdown. Many western diplomats are sceptical that Putin is willing to put pressure on Assad to start serious talks.

Kodami said: “Our assumption is what is new about this round of talks is that Russia will be interested in finding, and help broker, a peaceful settlement because it has declared the end of military confrontation and so this time it wants a peace agreement in Syria so it can can claim it helped resolve the conflict. But it needs legitimate partners with which to have contact.

“We need the Russians to weigh in on the Syrian government and they have the means to do so. This is the best moment for Russia to get a peaceful settlement and a final exit strategy.”

Russia continues to discuss with the Turkish president, Recep Tayyip Erdoğan, an additional and possibly separate peace process to that of the UN. His aides on Monday again raised the idea of a Syrian congress on national dialogue – probably in February in Sochi, the Russian Black Sea resort.