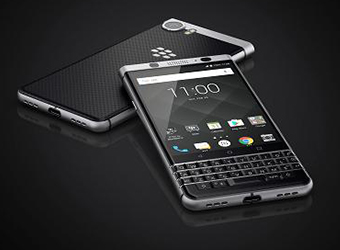 Last year, TCL signed a brand licencing deal with BlackBerry to use the technology company’s name for new smartphones, while the Toronto-based technology giant refocuses its business on software rather than devices.

At the Mobile World Congress in Barcelona, TCL took the wraps off the BlackBerry KEYone, which will be available in April. It’s key features that include:

TCL’s president of North America, Steve Cistulli, told CNBC that the company’s plan is to market this device to the enterprise market, as part of a broader strategy to recapture the hearts of consumers, and challenge mobile behemoths Samsung and Apple.

“We can compete with Apple and Samsung directly in the enterprise market,” Cistulli said in an interview on Saturday. “We are going to use this device, to break the armor and it’s our way in, once you have a way in you can get the mind share and hearts of those people.”

BlackBerry was once one of the most dominant brands in the mobile phone world, but quickly fell from the top of the heap shortly after Apple introduced the iPhone. The latter quickly seized the imagination of gadget geeks and devoured market share, leaving BlackBerry in the dust.

The Canadian firm lost more ground once Samsung also bulldozed its way into the smartphone market, but tried to stage a comeback as its market share languished in the single digits. BlackBerry’s efforts included releasing new units like the Leap and Android-powered PRIV, all of which fell flat as smartphone users flocked to iPhones and Galaxy devices.

After licensing its brand to TCL to make devices with the BlackBerry name, BlackBerry has increased its focus on software. Meanwhile TCL is hoping that it can use BlackBerry’s once strong brand to win back consumers that have since moved on.

The TCL executive also revealed that there will be more BlackBerry products coming to target the consumer market.

But with Apple, Samsung and Huawei dominating the high-end smartphone market, analysts said it could be a tough time for TCL’s BlackBerry devices.

“TCL will be hoping that by licensing the BlackBerry brand it can extend its market reach beyond the low margin consumer segment (which it currently targets via the Alcatel brand) to the higher margin enterprise devices space,” Ben Wood, chief of research at CCS Insight, told CNBC by email.

“However, the jury is out on how relevant the BlackBerry brand remains to that segment,” he added.

In recent years, BlackBerry’s operating system struggled to compete against Android and Apple’s iOS, both of which dominate the market. However, Cistulli said this time it is different and is setting ambitious goals for TCL.

The executive said the company, which also makes the Alcatel brand of mobile phones, is aiming to be the number three player in North America by 2020, and near the top five globally.