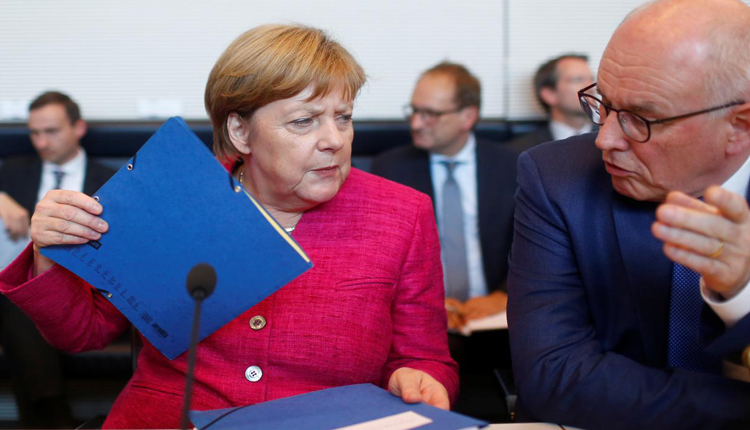 The threat of collapse still loomed over Germany’s three-month old coalition government on Wednesday after crisis talks into the early hours failed to resolve a row over immigration between Chancellor Angela Merkel and her Bavarian allies.

The dispute is over plans drawn up by Merkel’s interior minister Horst Seehofer, the head of Bavaria’s conservative Christian Social Union (CSU), to send back migrants who have registered in other EU states at the German border.

This is anathema to the usually flexible Merkel as it would undermine her open-door migrant policy and be a major setback to the EU’s Schengen free border system.

The CSU has given Merkel until the end of this week’s EU summit to agree migrant policies with EU partners that will reduce the burden on Germany – a tall order given how deeply divided Europe is on how to deal with the influx of migrants.

“From the next week we want migrants to be rejected at the border if they have already registered in another European country and should therefore go through the asylum procedure there,” Alexander Dobrindt, a senior CSU lawmaker, said.

The CSU meet on Sunday to decide whether to defy Merkel and introduce the new controls. The party wants Merkel to get a European deal, or at least bilateral deals with countries like Greece and Italy, saying nothing was to be gained by delaying action.

“I do not understand talking about possible future solutions for Europe while not being prepared to do what Germany can do now,” Dobrindt, a CSU hardliner, told German television.

If Seehofer goes ahead with his plans, many members of Merkel’s CDU say she would be forced to fire him.

Volker Kauder, a senior lawmaker in Merkel’s Christian Democrats (CDU), told German television the argument had not been resolved at Tuesday’s talks, which went on past midnight.

“It is very serious – we saw that in the talks, this is not about something small, it is about something central and important. We need to talk to each other,” said Kauder.

A breakup of the 70-year old alliance between the CDU and CSU would lead to a collapse of a coalition it took 6 months to negotiate and rob Merkel of a parliamentary majority.

The main options then look like a Merkel-led minority government or a new election. Merkel, who has been chancellor for nearly 13 years, may also lose support in her own CDU.

Andrea Nahles, head of the Social Democrats (SPD) who also share power with Merkel’s conservative bloc, said she was dissatisfied with the ongoing deadlock. Asked if she was preparing for a new election, she said: “I don’t know. To be honest with you, we are waiting to see.”

Merkel’s open-door migrant policy, which has led to the arrival of more than 1.6 million migrants in Germany since the start of 2015, is blamed for the rise of the far-right Alternative for Germany (AfD), now the main opposition party.