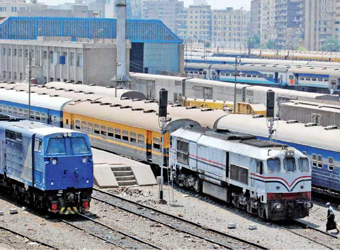 Egypt’s Minister of Transport Hesham Arafat visited on Saturday a control tower where a new electronic signal system was installed at Berket El-Saba train station in the province of Menoufiya north of Cairo.

The new signal system, which became operational a few days ago, is part of a plan by the ministry to upgrade the communication system along the Cairo-Alexandria railway in an effort to improve safety conditions.

“The new system relies less on human control, thereby increasing safety, and allows trains to move at higher speeds, which decreases trip duration and allows for more trains to be in operation,” Arafat said on the ministry’s official Facebook page.

The transport ministry’s efforts to upgrade the signal systems along several Egyptian train lines come at a cost of $1 billion.

The project, which is funded by the World Bank, the Kuwaiti Fund, and the Arab Fund for Development, is being executed by a number of multinational companies including Siemens and Thales.

Shortly after the train collision on 11 August, transport ministry officials said that the crash occurred when a malfunction brought one of the trains to a halt, causing the other train to smash into its rear.

Arafat said at a meeting with President Abdel Fattah al-Sisi following the accident that the malfunction was due to the Egyptian railway’s manual operation system and poorly developed infrastructure.

In 2013, 19 people were killed after a train derailed in Giza’s Badrashin.

In 2012, 51 people, mostly children, were killed when a train crashed into a school bus at a railway crossing in Upper Egypt’s Manfalut.