Egypt to revamp railways with 55bn pounds investments up to 2022: minister 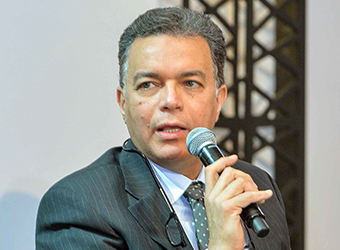 Share
Egypt’s Minister of Transport Hisham Arafat has announced a project to revamp the national railway network, with 55 billion pounds to be invested up to 2022.

During a surprise visit to Giza railway station on the Sham El-Neseem holiday, Arafat told reporters that Egypt has “a clear and comprehensive plan to develop all aspects of the railway system, whether in infrastructure, tractors, train carriages and signals,” Al-Ahram Arabic news website.

He said Egypt has signed deals with US company General Electric for the supply of 100 tractors and the refurbishing of 81 others, as well as access to funding for another 100 tractors.

He said his ministry will also sign deals for 1,300 passenger carriages and 300 others for cargo, emphasising that citizens will see an upgrade in the ailing system next year.

The minister’s statements come nearly a month after Egypt’s parliament finally approved several government-drafted amendments to the 1980 law that regulates the performance of the debt-laden Egyptian Railway Authority (ERA), with a view to rescuing the vital railways sector.

Parliament Speaker Ali Abdel-Aal described the amended law (Law No 152/1980) as a crucial step to reviving the ERA, which he said suffers from massive debts, outdated operation systems, and dilapidated train locomotives and wagons.

Last February, 12 people were killed when a passenger train collided with a cargo train in the northern governorate of Beheira.

In 2017, President Abdel Fattah al-Sisi highlighted the need to upgrade the railway network to prevent deadly accidents, stating that the system needs 180 billion Egyptian pounds (about $10 billion) to be modernised.

He made the statements shortly after an August train disaster in Alexandria that killed 41 people and injured some 179.

Egypt to increase a maximum of €2 bln with planned bond

Trump threatens to retaliate on Syria for chemical weapons attack