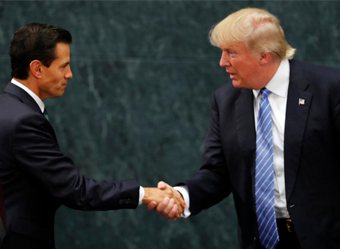 The presidents of the United States and Mexico spoke friendly by phone on Friday after relations between the neighboring countries over Donald Trump’s border wall scheme. The U.S. leader is demanding reworked trade and other ties.

The call between Trump and Enrique Pena Nieto came a day after the Mexican president scrapped a meeting set for next week at the White House.

It comes over Trump’s demand that Mexico pay for a multibillion-dollar wall along the lengthy southern U.S. border with Mexico. Mexico insists it will not pay for it.

Both countries issued statements saying Trump and Pena Nieto recognised their clear differences of opinion on the payment demand, and agreed to settle the matter as part of a broader discussion on all aspects of the two nations’ relationship.

Financial markets took news of the call as a sign that the crisis in U.S. Mexican relations just days after Trump took office had eased. Mexico’s peso rose on the news.

Mexico’s government statement said Trump and Pena Nieto agreed not to talk publicly for now about payment for the wall.

The White House did not immediately clarify whether Trump had agreed not to publicly discuss how the wall would be paid for.

During a joint news conference at the White House with visiting UK’s Prime Minister Theresa May after the call, Trump did not mention the wall even as he spoke expansively about U.S. relations with Mexico.

“Mexico, with the United States, has out-negotiated us and beat us to a pulp through our past leaders. They’ve made us look foolish,” Trump told the news conference.

“We have a trade deficit of $60 billion with Mexico. On top of that, the border is soft and weak, drugs are pouring in,” added Trump.

During the U.S. presidential campaign, Trump accused Mexico of sending rapists and other criminals into the United States.

The United States had a $58.8 billion trade deficit with its southern neighbor in the 11 months ending last November.

Trump called his hour long talk with Pena Nieto “very, very friendly.” He added that has a very good relationship with him and expressed a great respect for Mexico.

Mexico and the White House both called the meeting productive and constructive.

Nevertheless, Trump showed no signs of backing off pledges to renegotiate the North American Free Trade Agreement (NAFTA) with Mexico and Canada and slap high tariffs on American companies that have moved jobs south of the border.

Mexico sends 80 percent of its exports to the United States, and about half of Mexico’s foreign direct investment over the past two decades has come from its northern neighbor.

“We are going to be working on a fair relationship and a new relationship” with Mexico, Trump told the news conference with May.

Trump said the United States will renegotiate trade deals and other aspects of America’s relationship with Mexico, adding, “And in the end I think it will be good for both countries.”

U.S. congressional leaders said on Thursday they would take up legislation to provide $12 billion to $15 billion to pay for the wall.

Trump-who has insisted that Mexico will reimburse the United States for the entire cost- signed a directive on Wednesday for the wall to precede, part of a package of measures aimed at curbing illegal immigration.

The wall plan has angered Mexicans, and Trump’s policies toward Mexico have put Pena Nieto on the defensive.

The Republican president views the wall, a major promise during his election campaign, as part of a package of measures to curb illegal immigration.

Mexico has long insisted it will not heed Trump’s demands to pay for the construction project.

On Thursday, White House spokesman Sean Spicer sent the Mexican peso falling when he told reporters that Trump wanted a 20 percent tax on Mexican imports to pay for the wall.

Spicer gave few details, but his comments resembled an existing idea, known as a border adjustment tax, that the Republican-led U.S. House of Representatives is considering as part of a broad tax overhaul.

Trump said in an interview with the Christian Broadcasting Network on Friday that there were options besides an import tax that could be much more positive for both countries.

“The importance of the friendship between the two nations, and the need for the two nations to work together to stop drug cartels, drug trafficking and illegal guns and arms sales.” Mexico’s government said that the U.S. trade deficit also came up.

In Mexico City, billionaire Mexican businessman Carlos Slim said a united Mexico was ready to help the government negotiate with Trump and called on all political parties to support Pena Nieto in his discussions with the U.S. president.

In a rare news conference, Slim said that Mexico needed to negotiate from a position of strength, noting that Trump- who called a great negotiator- represented a major change in how politics will be conducted.

Gold prices steady but head for first weekly drop of 2017