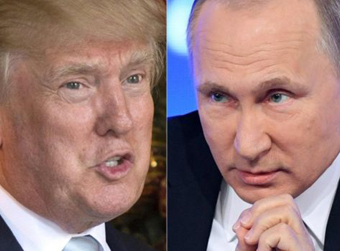 US President-elect Donald Trump has posted a series of tweets condemning those who oppose good relations with Russia as “‘stupid’ people, or fools”.

Mr Trump vowed to work with Russia “to solve some of the many… pressing problems and issues of the WORLD!”

His comments came after an intelligence report said Russia’s president had tried to aid a Trump election victory.

Mr Trump said Democrats were to blame for “gross negligence” in allowing their servers to be hacked.

In a series of tweets on Saturday, Mr Trump said that having a good relationship with Russia was “no bad thing” and that “only ‘stupid’ people, or fools, would think that it is bad!”

He added that Russia would respect the US more when he was president.

Mr Trump said frequently during his election campaign that he wanted to improve ties with Russia.

He has also repeatedly questioned US intelligence claims of Russian hacking in the election campaign.

Mr Trump tweeted on Saturday: “Only reason the hacking of the poorly defended DNC is discussed is that the loss by the Dems was so big that they are totally embarrassed!”

He was referring to the Democratic National Committee, whose email accounts were hacked during the election campaign.

•Using intermediaries such as WikiLeaks, DCLeaks.com and Guccifer 2.0 persona to release the information acquired from the hackings

After being briefed by intelligence chiefs on the report on Friday, the president-elect declined to mention Russia, but did say he had “tremendous respect for the work and service done” by those in the US intelligence community.

In the wake of the report, the US Department of Homeland Security announced that voting machines and other election databases would be classified as “critical infrastructure” and given more protection from cyber-attacks.

The unclassified part of the report says that the Kremlin developed a “clear preference” for Mr Trump.

Russia’s goals, the document added, were to “undermine public faith” in the US democratic process and “denigrate” his Democrat opponent Hillary Clinton, harming her electability and potential presidency.

“We assess Russian President Vladimir Putin ordered an influence campaign in 2016 aimed at the US presidential election,” it said.

It gives no detailed evidence of Mr Putin’s alleged role.

The report says Mr Putin liked Mr Trump because he had vowed to work with Moscow and the Russian leader had had “many positive experiences working with Western political leaders whose business interests made them more disposed to deal with Russia, such as former Italian Prime Minister Silvio Berlusconi and former German Chancellor Gerhard Schroeder”.

Mr Putin has called Mr Trump “a clever man” who should “quickly understand” his role.

Russia has not commented on the report but has previously denied the claims about influencing the election.

Last week, President Barack Obama ordered the expulsion of 35 Russian diplomats from the US over the alleged hacking. Russia has said it will not reciprocate.

On Saturday, Mr Trump confirmed that Dan Coats, a previously vocal critic of Russia’s annexation of Crimea, would be his new national intelligence director.

The Kremlin has yet to react to the report but state media rubbished it.

“The headline-grabbing accusations are based on TV programmes, posts on social networks and material from entertainment publications,” Russia’s most-watched TV station Channel One said.

Official state Rossiya 1 TV viewed the report through the prism of future relations between the two countries.

Its Washington correspondent Alexander Khristenko said the report was an “attempt to undermine the president-elect’s legitimacy”.

“Donald Trump himself remained critically-minded about the intelligence services’ conclusions,” he said, adding that “this is clearly not the sort of reaction from Trump that Washington hawks were counting on.”

Parliament should decide on Red Sea islands before judiciary: MP