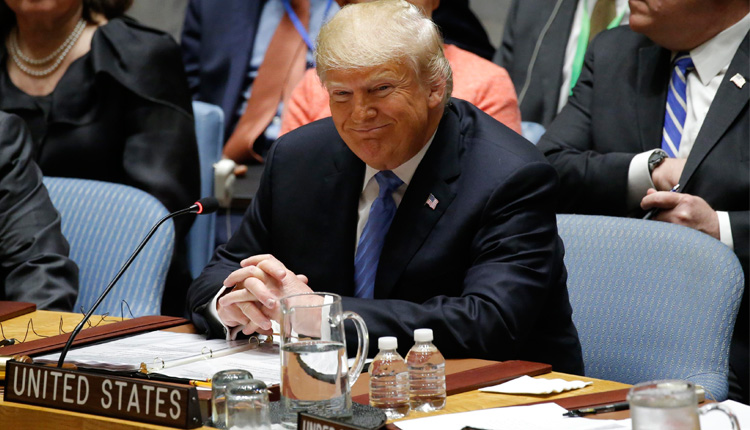 U.S. President Donald Trump said on Wednesday South Korea will not lift sanctions on Pyongyang without U.S. approval, after the South Korean foreign minister softened earlier comments that some of its unilateral sanctions were under review.

Trump’s rejection of South Korea easing sanctions alone outlines the official position of the United States and South Korea that the two countries remain in lockstep on North Korea.

He has encouraged U.S. allies to maintain sanctions on North Korea until it denuclearizes as part of his administration’s “maximum pressure” campaign against Pyongyang.

South Korean foreign minister Kang Kyung-wha suggested during a parliamentary audit on Wednesday that Seoul was considering easing its own sanctions against the North to encourage its denuclearization.

South Korea imposed unilateral sanctions on the North in 2010 following an attack on a warship that killed 46 South Korean sailors, banning most bilateral trade and exchanges.

Kang later walked back her comments after they sparked criticism from some conservative lawmakers, claiming North Korea should first apologize for the attack.

The South Korean foreign ministry also officially denied that the government was reviewing the matter.

However, there are growing calls for easing sanctions.

China, Russia, and North Korea believe it is necessary to consider adjusting U.N. sanctions against Pyongyang at an appropriate time, China’s foreign ministry said on Wednesday.

In a rare confirmation of discord between Seoul and Washington, South Korea’s Kang also said on Wednesday U.S. Secretary of State Mike Pompeo had expressed “discontent” with an inter-Korean military pact reached during a summit last month.

She said there were views in the United States regarding “adjusting the pace” of inter-Korean moves.

The drive for denuclearization sprang from pledges made by Trump and North Korean leader Kim Jong Un at their historic summit in Singapore in June, although there has since been disagreement over how that would be achieved.

Dow plunges more than 800 points in worst drop since February