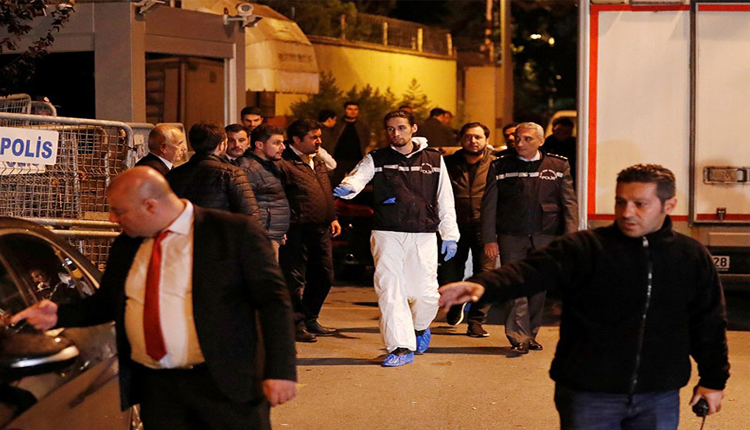 Saudi Arabia is preparing to acknowledge the death of Saudi journalist Jamal Khashoggi in a botched interrogation, CNN and the New York Times said on Monday, after U.S. President Donald Trump speculated “rogue killers” may be responsible.

Trump dispatched Secretary of State Mike Pompeo to meet King Salman over the case that has strained the Americans’ relationship with the Saudis, carefully cultivated by the U.S. president.

Khashoggi, a U.S. resident, Washington Post columnist and leading critic of the powerful Saudi crown prince, Mohammed bin Salman, vanished after entering the Saudi consulate in Istanbul two weeks ago to get marriage documents. Turkish officials say they believe he was murdered there and his body removed.

Members of his family called for an investigation, in a statement released on Monday.

“We are sadly and anxiously following the conflicting news regarding the fate of our father after losing contact with him two weeks ago,” they said.

“The strong moral and legal responsibility which our father instilled in us obliges us to call for the establishment of an independent and impartial international commission to inquire into the circumstances of his death.”

Citing two unidentified sources, CNN said on Monday that Saudi Arabia is preparing a report that would acknowledge Khashoggi was killed as the result of an interrogation that went wrong. The Saudi government could not be reached immediately for comment on the CNN report.

“I heard that report, but nobody knows if it’s an official report,” Trump told reporters, without elaborating.

The New York Times, citing a person familiar with the Saudi plans, reported the crown prince had approved an interrogation or rendition of Khashoggi back to Saudi Arabia. The Saudi government, it said, would shield the prince by blaming an intelligence official for the bungled operation.

The case has provoked an international outcry against Saudi Arabia, the world’s top oil exporter, with more media and business executives pulling out of a planned investment conference there this month.

While organizers said Monday the conference will go on, the Saudis canceled an annual diplomatic reception in Washington set for later this week.

Many members of the U.S. Congress, which has long had a testy relationship with Saudi Arabia, have issued strong criticism of the kingdom over the case.

Turkish authorities have an audio recording indicating that Khashoggi was killed in the consulate, a Turkish official and a security source told Reuters, and have shared evidence with countries including Saudi Arabia and the United States. They provided no further details.

Saudi Arabia has strongly denied killing Khashoggi and has denounced such assertions as “lies,” saying he left the building shortly after entering.

“The king firmly denied any knowledge of it,” Trump told reporters after speaking with King Salman. “He didn’t really know, maybe – I don’t want to get into his mind but it sounded to me – maybe these could have been rogue killers. Who knows?”

The U.S. president gave no evidence to support the theory. Democratic lawmakers criticized Trump for using the term “rogue killers”.

“Been hearing the ridiculous ‘rogue killers’ theory was where the Saudis would go with this,” Democratic U.S. Senator Chris Murphy said on Twitter.

“Absolutely extraordinary they were able to enlist the President of the United States as their PR agent to float it.”

Trump called Pompeo on Sunday night and asked him to have face-to-face meetings with the Saudi leaders, State Department spokeswoman Heather Nauert said.

Trump said Pompeo may go to Turkey after Saudi Arabia.

Turkish police investigators entered the Istanbul consulate late on Monday. A Turkish diplomatic source had earlier said a joint Turkish-Saudi team would search the building – the last place Khashoggi was seen before he vanished on Oct. 2.

“It has been 13 days since the event, so surely proving some of the evidence might be difficult” the Turkish official said.

A Saudi official, not authorized to speak publicly, told Reuters that the king had ordered an internal investigation based on information from the joint team in Istanbul.

Trump has threatened “severe punishment” if it turns out Khashoggi was killed in the consulate, although he has ruled out cancelling arms deals worth tens of billions of dollars with Saudi Arabia. European allies have urged “a credible investigation” and accountability for those responsible.

Khashoggi, a familiar face on Arab talk shows, moved to the United States last year fearing retribution for his criticism of Prince Mohammed, who has cracked down on dissent with arrests.

A pro-government Turkish daily published preliminary evidence last week from investigators who it said had identified a 15-member Saudi intelligence team that arrived in Istanbul on diplomatic passports hours before Khashoggi disappeared.

The Saudi consulate referred Reuters to authorities in Riyadh, who did not respond to questions about the 15 Saudis.

Saudi Arabia has responded to Western statements by saying it would retaliate against any pressure or economic sanctions “with greater action,” and Arab allies rallied to support it.

The Saudi riyal fell to its lowest in two years and its international bond prices slipped over fears that foreign investment could shrink amid international pressure.

The Saudi stock market had tumbled 7.2 percent over the previous two trading days but rebounded 2 percent on Monday.

Concern over Khashoggi’s disappearance has prompted media organizations and a growing number of guests to pull out of a “Davos in the Desert” investment conference set for Oct. 23-25, which has become the biggest show for investors to promote Prince Mohammed’s reform vision.