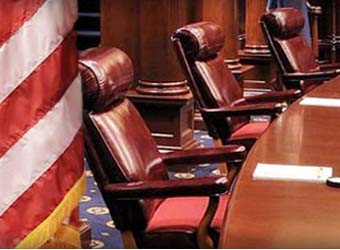 The first big showdown at the U.S. Supreme Court over President Donald Trump’s immigration policies is set for Wednesday when the justices hear a challenge to the lawfulness of his travel ban targeting people from several Muslim-majority countries.

The case represents a test of the limits of presidential power. Trump’s policy, announced in September, blocks entry into the United States of most people from Iran, Libya, Somalia, Syria and Yemen. Chad previously was on the list but Trump lifted those restrictions on April 10.

The high court has never decided the legal merits of the travel ban or any other major Trump immigration policy, including his move to rescind protections for young immigrants sometimes called Dreamers brought into the United States illegally as children. It has previously acted on Trump requests to undo lower court orders blocking those two policies, siding with him on the travel ban and opposing him on the Dreamers.

Trump’s immigration policies – also including actions taken against states and cities that protect illegal immigrants, intensified deportation efforts and limits on legal immigration – have been among his most contentious.

The conservative-majority Supreme Court is due to hear arguments on Wednesday on the third version of a travel ban policy Trump first sought to implement a week after taking office in January 2017, and issue a ruling by the end of June.

The lead challenger is the state of Hawaii, which argues the ban violates federal immigration law and the U.S. Constitution’s prohibition on the government favoring one religion over another.

“Right now, the travel ban is keeping families apart. It is degrading our values by subjecting a specific set of people to be denigrated and marginalized,” Hawaii Lieutenant Governor Doug Chin said in an interview.

The Supreme Court on Dec. 4 signaled it may lean toward backing Trump when it granted the administration’s request to let the ban go into full effect while legal challenges played out.

In another immigration-related case, the justices on April 17 invalidated a provision in a U.S. law requiring deportation of immigrants convicted of certain crimes of violence. Trump’s administration and the prior Obama administration had defended the provision.

Trump has said the travel ban is needed to protect the United States from terrorism by Islamic militants. Just before the latest ban was announced, Trump wrote on Twitter that the restrictions “should be far larger, tougher and more specific – but stupidly that would not be politically correct!”

The challengers have argued the policy was motivated by Trump’s enmity toward Muslims, pressing that point in lower courts with some success by citing statements he made as a candidate and as president. As a candidate, Trump promised “a total and complete shutdown of Muslims entering the United States.”

The Justice Department argues Trump’s statements as a candidate carry no weight because he was not yet president. The policy’s challengers also point to views he has expressed as president, including his retweets in November of anti-Muslim videos posted by a far-right British political figure.