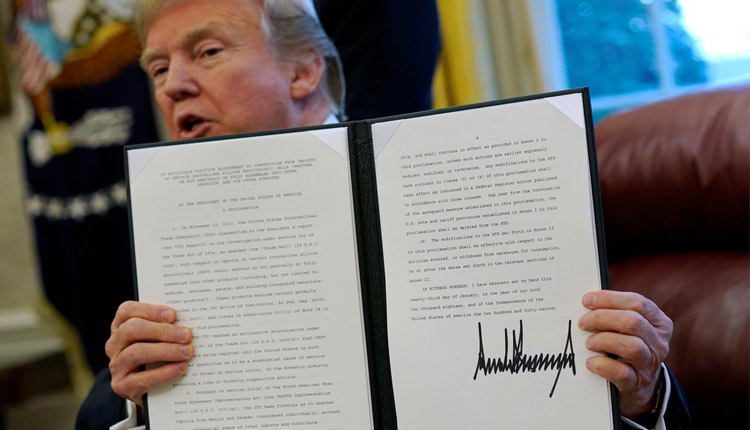 The bills face an uncertain future but underscore bipartisan concerns on Capitol Hill over the rising costs of the Trump administration’s trade policies. The United States in 2018 slapped duties on aluminum and steel from other countries, drawing criticism from lawmakers who support free trade and complaints of rising supply chain costs across business sectors.

Two bipartisan groups of lawmakers on Wednesday introduced legislation known as the Bicameral Congressional Trade Authority Act in the Senate and the House of Representatives.

The bills would require Trump to have congressional approval before taking trade actions like tariffs and quotas under Section 232 of the Trade Expansion Act of 1962. The law currently allows the president to impose such tariffs without approval from Capitol Hill.

“The imposition of these taxes, under the false pretense of national security (Section 232), is weakening our economy, threatening American jobs, and eroding our credibility with other nations,” said Republican Senator Pat Toomey of Pennsylvania, co-sponsor of the Senate bill.

Toomey led a similar push last year that did not go to vote. It is unclear that Congress would consider taking up such legislation now. Still, the bills underscore mounting pressure from lawmakers to address concerns over tariffs, especially those on Canada and Mexico as lawmakers ready to vote on a new North American trade deal agreed late last year.

Republican Chuck Grassley from Iowa, Chairman of the Senate Finance Committee, earlier pressed the Trump administration to lift tariffs on steel and aluminum imports from Canada and Mexico before Congress begins considering legislation to implement the new pact.

Numerous business and agricultural groups have come out in support of the United States-Mexico-Canada agreement, but have said its benefits will be limited so long as the U.S. tariffs and retaliatory tariffs from Canada and Mexico remain in place.

Companies are able to request to exemptions from the steel and aluminum tariffs, but the process has been plagued by delays and uncertainty.

“Virginia consumers and industries like craft beer and agriculture are hurting because of the President’s steel and aluminum tariffs,” said Democratic Senator Mark Warner, co-sponsor of the Senate legislation. “This bill would roll them back.”

Germany, France and UK to set up European transactions channel with Iran