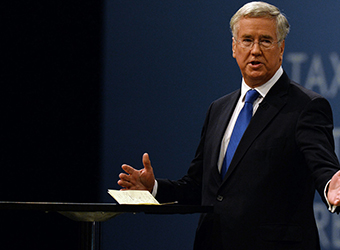 U.K. Defence Minister Michael Fallon has openly criticised what he perceives to be Russia’s interference in foreign affairs, warning of the need to “tackle the false reality” the country is propagating.

In a speech given at St. Andrews University Thursday night, Fallon was unequivocal when describing a series of hacks and propaganda campaigns linked to the Kremlin in recent months, saying that the country was “clearly testing NATO and the West,” as it had “chosen to become a strategic competitor.”

Fallon placed emphasis on Russia’s non-military methods of extending its influence, describing how the country was “weaponizing misinformation” through its “use of cyber weaponry to disrupt critical infrastructure and disable democratic machinery.”

For Fallon, adapting to cyber threats was crucial for the security of the U.K. and its allies, as he explained that “cyber defense is now part of NATO’s core task,” and that it was a necessary part of “supporting reform to make NATO more agile.”

“We express regret for this hostile stance … We are sure that such allegations are baseless,” Dmitry Peskov, Kremlin spokesperson, told reporters Friday.

Fallon’s speech also appeared to reiterate the U.K. government’s alliance with new U.S. President Donald Trump. Fallon described Trump as a “realist” in terms of his stance on Russia.

“President Trump has spoken about the need for engagement with Russia – he’s right,” Fallon said.

But, Fallon’s focus on the importance of NATO jarred with Trump’s previous claims that the military alliance was “obsolete.” Counteracting this, the defense minister instead asserted that “President Trump is 100 percent backing NATO” and supported his call for all members to spend the expected 2 percent of GDP on defense.

There has been an escalation of fighting in eastern Ukraine in recent days, leading to – according to Reuters – the “highest casualty toll in weeks” and diplomacy between Russia and Ukraine becoming increasingly hostile.

Fallon did stress that relations between the West and Russia were still developing.

“We need to understand Russia better,” he said. “There is nothing inevitable about a retreat to the days of the Cold War.”