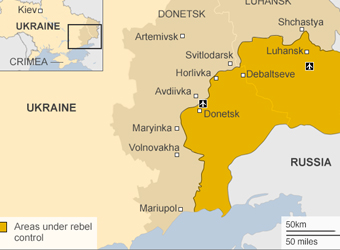 UN Security Council has warned of a dangerous deterioration in eastern Ukraine and called on warring sides to halt the violence.

The council said that renewed fighting was having a severe impact on civilians.

Fighting in the frontline town of Avdiivka has left thousands of residents without water or power in freezing conditions.

Ukraine says it is preparing a possible evacuation of the town to avoid a humanitarian crisis.

Each side blames the other for the upsurge in violence.

“The members of the Security Council called for an immediate return to a ceasefire regime,” the Ukrainian-drafted statement said.

The text did not raise objections from Russia- a permanent member of the council- which has in the past routinely blocked statements put forward by Ukraine.

More than 9,700 people have died in the conflict which erupted in 2014 when Russia annexed Ukraine’s southern Crimea peninsula.

Pro-Russian rebels later launched an insurgency in the east.

The US and EU imposed sanctions on Russia in response to its actions in eastern Ukraine. Russia has denied backing the rebels.

Ukrainian forces say that the latest outbreak began when rebels launched an attack on the government-held town of Avdiivka, which borders land controlled by the separatists.

Seven soldiers and a number of rebels have been killed in recent days, and there have been civilian casualties although precise numbers are unclear.

Ukraine says that if the evacuation goes ahead, up to 8,000 people could be moved each day from the town.

“Everything is going bad,” a resident in Avdiivka, who identified herself only as Nadiya, added.

“People are scared and try to go out. It’s very cold. There are bread queues. Only a few shops are open,” he said.

Officials say that the evacuation will go ahead if the fighting escalates further. About 10 tonnes of food will soon arrive in the city, they add.