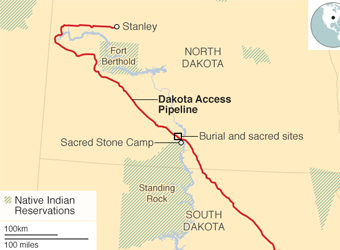 U.S. Army has been ordered to allow the construction of the final section of a controversial oil pipeline.

North Dakota Senator John Hoeven said that the Army Corps of Engineers had been directed to allow work under Lake Oahe, a reservoir on the Missouri River.

Native Americans, who have protested against the Dakota Access Pipeline for months, vowed legal action to stop it.

The U.S. Army Corps of Engineers- which has approval authority- decided last year to explore other routes for the pipeline amid huge protests by the Standing Rock Sioux Tribe.

In an announcement on Tuesday, Mr Hoeven said that the acting Secretary of the Army, Robert Speer, had ordered the corps to allow the work necessary to complete the pipeline.

But the Standing Rock Sioux Tribe argues that the Army has to wait for the results of a scheduled environmental impact study (EIS) that was ordered in January.

“The Army Corps lacks statutory authority to simply stop the EIS,” they said in a statement.

The $3.7 billion (£2.8 billion) pipeline is designed to transport about 470,000 barrels of crude oil a day across four states, from North Dakota to a terminal in Illinois, where it can be shipped to refineries.

They and their supporters have set up a Sacred Stone spiritual camp near the Missouri river.

He told the Army to quickly reconsider its decision to explore other routes.