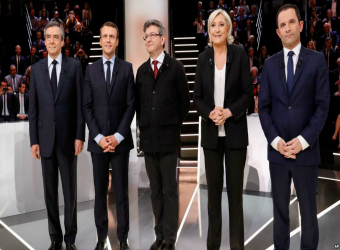 A month before the first round of France’s presidential election, around 43 percent of voters are hesitant about who to vote for, a poll revealed Friday, underlining the uncertainty surrounding the volatile election campaign.

Opinion polls show independent centrist Emmanuel Macron and far-right leader Marine Le Pen likely to lead in the first round of the election on April 23 and that these two candidates would go through to a May 7 run-off that Macron would win easily.

But an opinion poll by Odoxa for franceinfo radio found that 43 percent of voters were still hesitating between several candidates, which it said reflected an “uncertainty unprecedented in (French) electoral history.”

“The level of voter indecision about the candidates is completely exceptional,” Odoxa said.

Investors have been jittery about the possibility of Le Pen, leader of the anti-European Union, anti-immigration National Front, winning the election and taking France out of the euro.Source: CNBC

Fillon, once the front-runner, has slipped in the polls since media reports in late January that he had paid his wife, Penelope, and two children hundreds of thousands of euros of public funds for work they may not have carried out.

Fillon accused President Francois Hollande in a television interview on Thursday of being involved in what he alleges is a government plot to spread damaging media leaks about his affairs to destroy his chances of being elected.