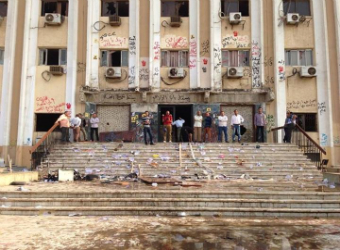 Students Ahmed Abdel-Hafez and Atta Ahmed were shot dead outside the university dormitories, according to Al-Ahram’s Arabic news website.

The university administration has called for an urgent investigation into the killing, state news agency MENA reported.

Several students were injured in the violence, with others arrested.

Earlier in the day, security forces stormed the campus, upon the request of the university administration, to disperse protesting students.

Police used teargas and fired warning shots into the air.

Other students, who have been suspended for “rioting and sabotage during protests” on campus, formed human chains around the administration building with signs reading, “Why am I suspended?”

“The administration has suspended 39 students for periods ranging from one semester to two years,” student union spokesperson Ahmed Adel-Saeid said.

Al-Azhar University, the highest seat of Sunni Islamic learning, has been the site of numerous protests since the ouster of Islamist president Mohamed Morsi in July 2013.

Clashes have often broken out between pro-Morsi students and security forces at the university’s campuses in Cairo and other cities.

A number of other universities have witnessed protests, but none as intense as Al-Azhar.

Earlier this month, 16 Al-Azhar students were sentenced to three years in prison for taking part in clashes in December.

In a separate trial, 17 others were sentenced to 14 years in jail on charges of rioting, damaging public property, burning vehicles and attacking security personnel and Al-Azhar staff.