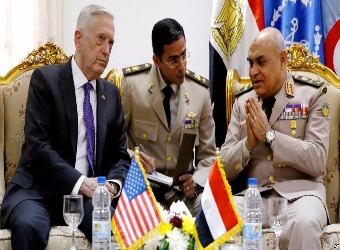 Mattis was expected to speak with Egyptian Defense Minister Sedki Sobhy and President Abdel Fattah el-Sissi, whose White House visit earlier this month was the first by an Egyptian leader since former U.S. President Barack Obama hosted Hosni Mubarak in 2009.

Political upheaval in 2011 ousted Mubarak and started years of turmoil that brought the authoritarian former general Sissi to power.

Middle East expert James Gelvin, a professor at the University of California in Los Angeles, told VOA much of the Trump administration’s policy is aimed at being anti-Obama.

“In other words, [Trump] looks at what Obama did and says, ‘I’m going to do something very, very different,’” Gelvin said.

Mattis was expected to push Egypt, which is struggling with political, financial and security issues, to remain tough on counter-terrorism amid a threat in the Sinai Peninsula and even in some urban areas, as shown in the deadly Palm Sunday attacks on Coptic churches in Alexandria and Tanta conducted by Islamic State militants.

“It seems that this threat is growing. The first thing is, get your own house in order, Egypt,” Brian Katulis, a senior fellow for national security at the Center for American Progress, told VOA.

Katulis said Mattis and others in the Trump administration should lean on allies like Saudi Arabia and Egypt to make sure partner efforts on the ground in Iraq, Syria, Yemen or Libya do not “simply fragment these countries” and instead connect to “actually isolating terrorist and extremist groups [while] also consolidating power in these countries.”

In Libya, the U.S. has thus far supported the U.N.-backed Government of National Accord while providing airstrikes to help Libyans push Islamic State out of the country. Egypt also has bombed Islamic State targets in Libya but has instead backed Libyan military commander Khalifa Haftar.

One U.S. official told VOA he hopes Libya will be a topic Mattis discusses in Cairo Thursday, adding that the “most important thing in Libya is that Libyans do not allow ISIS to regain a foothold there.”

Egypt’s support of Haftar is a “bigger problem” that could cause Libya to further unravel, Katulis said, but added that the issue needs to be mediated by someone outside the Pentagon rather than Mattis.

“It needs somebody who is thinking of the broader strategy in Libya and the Middle East, and a worry that I have here is that I don’t see that person yet inside of the Trump administration,” he told VOA.

Furthermore, reports of Russian military members setting up on a base in western Egypt have been disputed by Egyptian officials. U.S. officials have said a Russian deployment there could be a bid to help bolster Haftar in Libya.

One U.S. official told VOA Wednesday the U.S. is not concerned about Russian influence in Egypt.

“We will explain to the Egyptians, as we have to other Arab countries in the region, that getting too close to Russia is not in their best interest,” the official said.