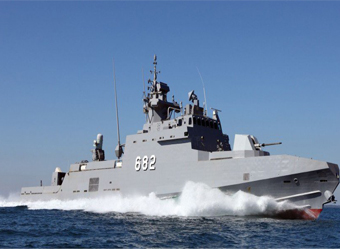 The United States delivered two more Fast Missile naval vessels to the port of Alexandria “in support of Egypt’s security and the Egyptian people”, the American embassy in Cairo announced Monday.

The two Fast Missile Craft, built in Pascagoula, Mississippi, arrived in Alexandria on board a U.S. transport ship, and will be integrated into the Egyptian Naval fleet in the coming weeks.  This delivery effectively doubles Egypt’s total fleet of Fast Missile Craft from two to four.

The two Fast Missile Craft reached the Mediterranean city of Alexandria on June 17, a US embassy statement said.

At the end of March Washington unfroze its military assistance but continued to denounce rights violations in Egypt and the repression of Islamists.

“This delivery is a sign of America’s ongoing commitment to Egypt and to our shared security interests in Egypt and the region.”

The Fast Missile Craft project began in 2005, when plans were initiated by the U.S. Department of Defense to help produce a naval vessel especially for the Government of Egypt. Having received training on the Fast Missile Craft in Pensacola, Florida, Egyptian Navy personnel are now conducting all required inspections and will activate the vessels in Alexandria shortly.  Culminating 10 years of close coordination between the Egyptian and American Navies, the Fast Missile Craft is first in its class and provides both high speed and high maneuverability.

Greek offer to Creditors runs into Angry Backlash at Home