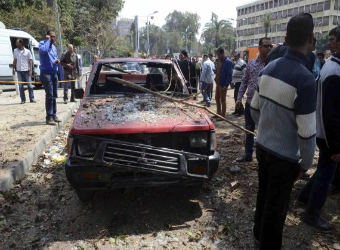 The US embassy in Cairo has issued a statement denouncing Wednesday’s bombings in front of Cairo University.

“As we have said before, there is absolutely no justification for such cowardly attacks,” read the statement, adding that the embassy “extends its condolences to the families and friends of those who were killed and hopes for the swift and full recovery of those injured.”

Three explosions occured near a police post outside of the university’s gates, according to Hesham Youssef, head of the explosives section at Giza Security Directorate.

Brigadier-General Tarek El-Mergawi was killed and at least five police officers were injured in the first bombing.

A fourth bomb was later defused in the same area.