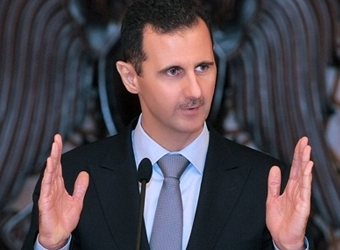 The United States fired cruise missiles on Friday at a Syrian airbase from which President Donald Trump said a deadly chemical weapons attack had been launched, the first direct U.S. assault on the government of Bashar al-Assad in six years of civil war.

In the biggest foreign policy decision of his presidency so far, Trump ordered the step his predecessor Barack Obama never took; directly targeting the Syrian military for its suspected role in a poison gas attack that killed at least 70 people

That catapulted Washington into confrontation with Russia, which has military advisers on the ground aiding its ally, President Assad. The Kremlin called the U.S. strikes illegal aggression.

“Years of previous attempts at changing Assad’s behavior have all failed and failed very dramatically,” Trump said as he announced the attack from his Florida resort, Mar-a-Lago, where he was meeting Chinese President Xi Jinping.

“Even beautiful babies were cruelly murdered in this very barbaric attack,” he said of Tuesday’s chemical weapons strike, which Western countries blame on Assad’s forces. “No child of God should ever suffer such horror.”

U.S. officials said that the strike was a “one-off” intended to deter future chemical weapons attacks, and not part of a wider expansion of the U.S. role in the Syria war.

But the swift action is likely to be interpreted as a signal to Russia, as well as to other countries such as North Korea, China and Iran where Trump has faced foreign policy tests early in his presidency, that he is willing to use force.

“This clearly indicates the president is willing to take decisive action when called for,” U.S. Secretary of State Rex Tillerson told reporters. “I would not in any way attempt to extrapolate that to a change in our policy or our posture relative to our military activities in Syria today. There has been no change in that status.”

Even without any promise of more U.S. action, the strikes could embolden Assad’s enemies, after months when Western powers appeared to grow increasingly resigned to him staying in power.

The Syrian government and Moscow have denied that Syrian forces were behind the gas attack, but Western countries have dismissed their explanation – that chemicals leaked from a rebel weapons depot after an air strike – as beyond credibility.

The Syrian army said the U.S. attack killed six people at its air base near the city of Homs. It called the strike “blatant aggression” and said it made the United States a “partner” of “terrorist groups” including Islamic State (IS) militants. Homs Governor Talal Barazi told Reuters the death toll was seven.

Syrian state television later said nine civilians were killed in villages near the base. There was no independent confirmation of civilian casualties.

“President Putin views the U.S. strikes on Syria as aggression against a sovereign state in violation of the norms of international law and on a made-up up pretext,” said a Kremlin statement. “This step by Washington will inflict major damage on U.S.-Russia ties.”

Russian television showed craters and rubble at the site of the airbase and said nine aircraft had been destroyed.

Moscow suspended communication with U.S. forces designed to stop planes colliding over Syria, one of the few direct forms of cooperation since the two rivals began flying combat missions in the same air space for the first time since the Cold War.

A Russian frigate carrying cruise missiles sailed through the Bosphorus Strait into the Mediterranean Sea, a sign of Moscow’s military presence in the area although there was no indication it was directly in response to U.S. action.

Western allies of the United States backed the decision to launch the strikes, with several countries describing it as a proportionate response to Assad’s suspected use of poison gas.

Several countries said they were notified in advance, but none had been asked to take part.

U.S. officials said they had taken pains to ensure Russian troops were not killed, warning Russian forces in advance and avoiding striking parts of the base where Russians were present.

Syrian officials and their allies also said they did not expect the attack to lead to an expansion of the conflict.

“No doubt this will leave great tension on the political level, but I do not expect a military escalation,” a senior, non-Syrian official in the alliance fighting in support of Assad who declined to be identified told Reuters. “Currently I do not believe that we are going toward a big war in the region.”

Washington has long backed rebels fighting against Assad in a multi-sided civil war under way since 2011 that has killed more than 400,000 people. The war has driven half of Syrians from their homes, creating the world’s worst refugee crisis.

The United States has been conducting air strikes against IS militants who control territory in eastern and northern Syria, and a small number of U.S. troops are on the ground assisting anti-IS militias. But until now, Washington had avoided direct confrontation with Assad.

Russia, meanwhile, joined the war on Assad’s behalf in 2015, action that decisively turned the momentum of the conflict in the Syrian government’s favor. Although they support opposing sides in the war between Assad and rebels, Washington and Moscow both say they share a single main enemy, IS.

Trump’s decision to strike Syrian government forces is a particularly notable shift for a leader who in the past had repeatedly said he wanted better relations with Moscow, including to cooperate with Russia to fight IS.

However, Trump had also criticized Obama for setting a “red line” threatening force against Assad if he used chemical weapons, only to pull back from ordering air strikes in 2013 when Assad agreed to give up his chemical arsenal.

Russian media long portrayed Trump as a figure who would promote closer relations with Moscow. At home, Trump’s opponents have accused him of being too supportive of Putin. Tillerson is due in Russia next week, and Russian officials said they hoped to patch over the differences over Syria.

Tuesday’s attack was the first time since 2013 that Syria has been accused of using sarin, a banned nerve agent it was meant to give up under the Russian-brokered, U.N.-enforced deal that persuaded Obama to call off air strikes four years ago.

Video and pictures of the aftermath were shown around the world this week, depicting limp bodies and children choking while rescue workers hosed them down to try to wash off the poison gas. In Russia, state television blamed rebels and did not show footage of victims.

Tomahawk missiles were fired from the USS Porter and USS Ross around 0040 GMT, striking multiple targets – including the airstrip, aircraft and fuel stations – on the Shayrat Air Base, which the Pentagon says was used to store chemical weapons.

Over the previous few months, many Western countries had been quietly backing away from long-standing demands that Assad leave power, accepting that rebels no longer had the power to remove him by force. But after the chemical weapons attack on Tuesday, several countries renewed calls for Assad to go.

Among them was Turkey, long one of Assad’s principal foes, which had in recent months reached a rapprochement with Russia and had been co-sponsoring Syrian peace talks with Moscow. Ankara’s change of tone could make it harder for Russia to put forward a peace plan that would keep Assad.

The attacks spurred a flight to safety in global financial markets, sending yields on safe-haven U.S. Treasury securities to their lowest since November. Stocks weakened in Asia and U.S. equity index futures slid, indicating Wall Street would open lower on Friday. Prices for oil and gold both rose, and the dollar slipped against the Japanese yen.