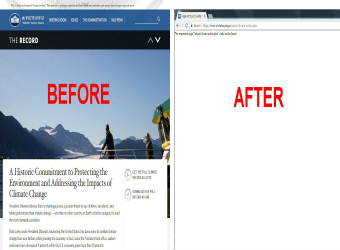 “The requested page “/energy/climate-change” could not be found.”; that is all that remains of the U.S. White House’s webpage on climate change.

The White House website was updated immediately after President Donald Trump assumed the nation’s highest office. The president has long said he doubts whether global climate change is real, and there now appears to be no reference to it on whitehouse.gov.

Under former President Barack Obama, the website previously hosted sections that laid out plans for combating climate change and steps the Obama administration had already taken.

In the section of the updated website dedicated to issues, the Trump team has highlighted six topics, including “America First Energy Policy.” The policy page touts Trump’s plan to tap oil and gas reserves and to revive the coal industry, but does not mention renewable energy.

“For too long, we’ve been held back by burdensome regulations on our energy industry. President Trump is committed to eliminating harmful and unnecessary policies such as the Climate Action Plan and the Waters of the U.S. rule,” the page says.