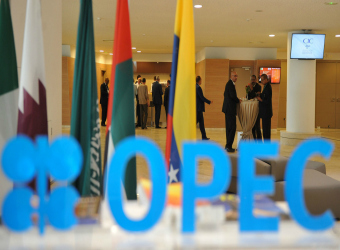 Representatives of OPEC and several other major oil producers arrived in Vienna Friday for their first meeting to monitor compliance with an agreement to cut output.

Ministers from Saudi Arabia, Kuwait, Algeria and Venezuela will meet counterparts from non-OPEC nations Russia and Oman to figure out ways to verify that the 24 signatories to the historic deal are following through on their pledge to remove a combined 1.8 million barrels a day of supply from the market for six months. They intend to prove the group is serious about finally eliminating a three-year crude oversupply and dispel skepticism stemming from previous unfulfilled promises.

International oil prices rose to an 18-month high of more than $58 a barrel after the Organization of Petroleum Exporting Countries and several non-members agreed on Dec. 10 to end two years of unfettered production and instead cut output. Crude has since slipped about 5 percent from that peak as traders await proof that they will follow through on the deal.

Ministers will hold an informal dinner Saturday evening before gathering at OPEC headquarters for the first official meeting of the monitoring committee Sunday morning, according to people familiar with the matter, who asked not to be identified because the agenda isn’t public.

With January not yet complete, the first meeting will focus mostly on how compliance will be assessed rather than producing any new data, said one person. The committee currently has no plans to use external agencies, such as consultants that track oil exports by monitoring tanker movements, to verify that countries are implementing the pledged supply curbs, said three people familiar with the matter.

As outlined in OPEC’s initial agreement, monthly production data known as “secondary sources” compiled by analysts in the group’s secretariat will be the principal tool for judging whether members are complying with the deal, the people said. Those figures do not cover non-members such as Russia. The committee will hold monthly meetings, they said.

OPEC’s production fell by 220,900 barrels a day to 33.085 million a day in December, led by declines in Saudi Arabia and Nigeria, according to secondary sources data in the group’s monthly report published Jan. 18. The organization agreed to reduce its output to 32.5 million barrels a day, although that total included about 740,000 barrels a day of output from former member Indonesia.

The first two weeks of January saw “very strong” compliance and the majority of producers are already exceeding their pledged cuts, Saudi Arabia’s Minister of Energy and Industry Khalid Al-Falih said at the World Economic Forum in Davos, Switzerland, on Thursday. About 1.5 million barrels a day of production has been withdrawn from the market so far, he told Al Arabiya television in an interview Friday.