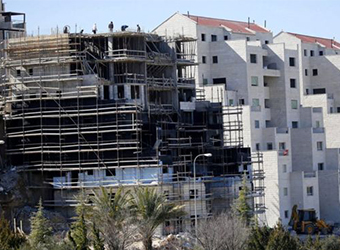 Adalah and the Jerusalem Legal Aid and Human Rights Centre also requested an injunction to freeze its implementation pending a ruling by the court.

The law, passed by Israel’s parliament, has been denounced by Palestinians.

Israel’s attorney-general has also warned that it is unconstitutional.

Avichai Mandelblit has said he will not defend the legislation in court, and may even be called testify against it, according to Israeli media reports.

More than 600,000 Jews live in about 140 settlements built since Israel’s 1967 occupation of the West Bank and East Jerusalem – land the Palestinians claim for a future state.

The settlements are considered illegal under international law, though Israel disputes this.

There are also 97 settler outposts – built without official authorisation from the Israeli government – across the West Bank, according to the Israeli anti-settlement watchdog Peace Now.

The so-called Regularisation Bill said that settlement construction in the West Bank carried out in good faith and without knowledge that the land was privately owned can be recognised by the government if settlers show they received some kind of state support in establishing themselves at the site.

It allows the government to expropriate land for its own use if the Palestinian owners are unknown.

If the owners are known, they will be compensated with money or an alternative plot.

Peace Now said the law would allow for the retroactive legalisation of 3,921 homes in 72 settlements and 55 outposts built on approximately 818 hectares (2,020 acres) of private Palestinian land.

On Wednesday, Adalah and the JLAC filed an appeal against the legislation with the Supreme Court on behalf of 17 Palestinian towns and villages.

“This sweeping and dangerous law permits the expropriation of vast tracts of private Palestinian land, giving absolute preference to the political interests of Israel as an occupying power and to Israeli settlers,” Suhad Bishara, a lawyer for Adalah, said in a statement.

“It violates the property rights both of resident and refugee Palestinians.”

Bishara said that the Supreme Court had given the Israeli government 30 days to respond.

Deputy Foreign Minister Tzipi Hotovely said in an English-language video statement: “The underlying premise behind the critics of Israel is that this is occupied Palestinian land. This premise is incorrect.”

“Israel has both historic and legal rights to this land and the law reaches the right balance between the rights of the Jewish families to their homes and the right of the owners of these plots of land to get compensation,” she added.

The Supreme Court has in the past annulled laws it deemed unconstitutional.

Two years ago it ordered the dismantling of the largest settlement outpost, Amona, because it was built on private Palestinian land.

Palestinian Authority President Mahmoud Abbas has described the law as an aggression against our people that we will be opposing in international organisations.

“What we want is peace, but what Israel does is to work toward one state based on apartheid,” he told reporters in Paris on Tuesday.

U.S. officials said they would withhold comment on the legislation until the relevant court ruling.

U.S. President Donald Trump is seen as more sympathetic to settlement activity than his predecessor, Barack Obama, who chose in December not to veto a UN Security Council resolution declaring that Israeli settlements had no legal validity and were an obstacle to peace.