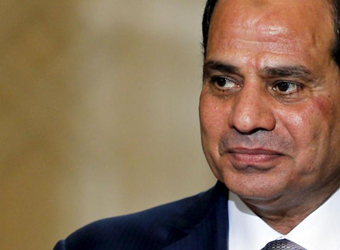 Out of the Egyptian parliament’s total 596 MPs, 490 have signed recommendation forms in favour of nominating President Abdel Fattah al-Sisi for another four-year term in office during this year’s presidential elections.

Article 142 of Egypt’s 2014 constitution states that a hopeful presidential candidate must secure the recommendation of at least 20 MPs, or 25,000 citizens from 15 governorates, with a minimum of 1,000 from each governorate.

MPs signed the forms one day after the election timeline was announced at a press conference by the National Elections Authority (NEA).

NEA chairman Lasheen Ibrahim said that recommendation forms would be sent to more than 350 public notaries across Egypt and to parliament so that citizens and MPs can use them to officially support the presidential candidate they favour.

Ibrahim said that in accordance with the Article 142, “recommendation forms approved by NEA members were sent to public notaries so that citizens can use and document them before they are submitted to the NEA.”

Parliament speaker Ali Abdel-Aal told MPs that “the recommendation forms were sent by the NEA on Tuesday morning and MPs can use them in accordance with Article 108 of parliament’s internal by-laws.”

“An MP cannot recommend more than one candidate or sign a recommendation form on behalf of a fellow MP,” said Abdel-Aal.

MPs were quick to voice their support for Sisi’s candidacy, even though the president has not officially announced his intention to run.

It is expected that the number of MPs to support El-Sisi’s candidacy will reach 500 by late Wednesday.

MPs who recommended President Sisi include a number of high-profile figures, including parliament speaker Abdel-Aal, head of the majority Support Egypt Bloc Mohamed El-Sewedy, as well as head of the media, culture and antiquities committee Osama Heikal.

A number of opposition MPs including Nasserist Kamal Ahmed and Wafdist Mohamed Khalifa have also joined the El-Sisi supporters, while a number of leftist MPs, including political analyst Samir Ghattas and head of the 25-30 bloc Haitham El-Hariri, have abstained from joining the pro-Sisi MPs.

MP Ghattas told Ahram Online that he has no intention of recommending any candidate. Ghattas also dismissed rumours that some hopeful candidates such as former MP Mohamed Anwar El-Sadat have solicited his recommendation.

El-Sadat, the head of the liberal Reform and Development Party and nephew of late president Anwar El-Sadat, sent parliament speaker Abdel-Aal a letter on Wednesday asking for permission to gather recommendation signatures from 20 MPs, the minimum required by the constitution.

El-Sadat,  who served as the ex-chairman of parliament’s committee on human rights was stripped of membership in February 2017, has announced several times that he intends to run for president, on condition that the NEA guarantees that all candidates are treated equally in terms of campaigning and media coverage.