Al-Azhar University’s Second Semester Off To A Quiet Start 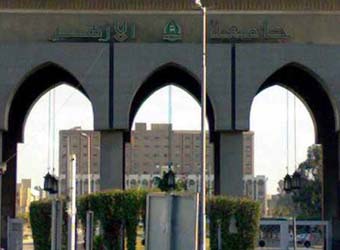 The second semester at Egypt’s Al-Azhar University started Saturday peacefully with no clashes between the police and students.

An on-campus protest was organised by tens of women students who marched around the Faculty of Islamic studies to demand the release of their detained female colleagues who are accused of inciting riots inside the university.

Last semester, students of Al-Azhar, the world’s oldest Islamic institution, organised protests on a daily basis, both on campus and outside, to protest the ouster of Islamist president Mohamed Morsi.

In the early hours of Saturday, some students spray-painted newly constructed walls on campus that were built by the university to “protect the students.”

The walls were spray-painted with slogans against Al-Azhar, the highest Sunni authority in the world that runs Al-Azhar University, as well as the university’s board, condemning the arrest of students during the first semester.

Al-Azhary said spray-painting the walls is a step in what he described as “Al-Azhar’s second uprising.”

Al-Azhar started one week later than the rest of Egyptian universities.

Egyptian police entered Al-Azhar University campus in Cairo in October to confront violent Islamist protests upon a request from the university head. It was the first time security forces set foot onto a university campus since a 2010 court ruling banned interior ministry guards, known for their heavy-handed tactics, from operating on university grounds.

The university’s main campus in the Nasr City district of Cairo was not the only scene of violence last semester. Clashes between police and rioting students were also reported in Sharqiya and Daqahliya in the Nile Delta, and the southern city of Assiut, prompting university administrations to postpone end-of-term exams at several institutions.

Other Egyptian universities have witnessed protests as well, however, none was as intense as at Al-Azhar University.

Dozens of Al-Azhar students face trial for rioting. Some 21 students were sentenced in late February to three years in prison on related charges.

Four students were killed since the start of clashes at the university last semester, a spokesman of the Forensic Authority said in January.

Kia Motors Aims to Boost Sales 20% in Egypt This Year