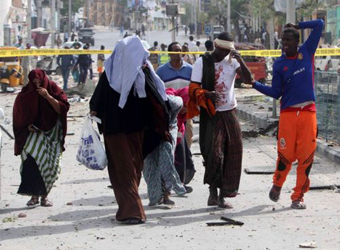 Ambulance workers in the Somali capital Mogadishu told the BBC they have counted 28 dead bodies at a hotel following a bomb attack by militants.

They said 43 others, including seven journalists, were injured after bombs exploded at the Dayah hotel – although there have been no official numbers.

The Islamist militant group al-Shabab has said it carried out the attack.

Eyewitnesses said the attackers used a vehicle laden with explosives to blast their way into the hotel, where members of parliament were believed to be staying.

Shortly after the first blast, another vehicle exploded, killing and wounding more people who had gathered in the area.

Survivors described how hotel residents hid under beds and others jumped out of windows to escape from the attackers.

Hassan Nur told the AP news agency: “They [the gunman] kicked down room doors and at some point posed themselves as rescue teams by telling those inside to come out, (only) to kill them.”

“We have rescued the people and concluded the operation at Dayah hotel,” he said.

“The security forces are now inside the hotel.”

The hotel is located less than a mile from Somalia’s presidential palace and is popular with dignitaries.

The attack comes at a time when the country is preparing for indirect elections where MPs are set to choose a president.