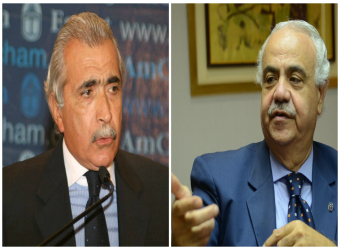 A delegation comprising 35 of the most prominent Egyptian investors with direct business relations with U.S. market will start Sunday the 40th Door-Knocking delegation to the United States.

Organised by the American Chamber of Commerce and Industry (AmCham) in Cairo, the delegation will start a series of meetings aimed at building bridges of communication between the private sectors in both countries. The delegation aims to draw a precise picture that reflects the current developments in Egypt at the level of the fulfilled economic reformations and their impact on the investment climate.

It will tackle the prospects for future cooperation sought by Egyptian companies with their U.S. counterparts following the recent important visit of Egyptian President Abdel Fattah al-Sisi to Washington earlier this month.

The five-day agenda of the delegation includes a series of meetings with U.S. private sector leaders and major U.S.  companies involved in various investment fields, as well as with U.S. economic policymakers and defence and national security officials. The delegation will also meet with officials in the U.S. Congress along with representatives of major U.S.-based financial and international institutions, such as the International Monetary Fund and the World Bank.

The annual visit of the delegation comes at the light of new variables that govern the relationship between Cairo and Washington in its political and economic natures. The Egyptian President Sisi’s recent U.S. visit paved the way to re-formulate the political and security cooperation between the two countries with a strong welcome from U.S. President Donald Trump.

The Egyptian economy recently witnessed radical changes worthy of re-evaluation of the US private sector figures of the private investment climate in Egypt and the feasibility of maximizing their work during the coming period.

Comes at the top of these transformations the economic and monetary reform witnessed by the Egyptian economy in early November 2016. These reforms resulted in the floatation of the exchange rate of the local currency against foreign currencies, some cuts in fuel subsidies, the application of the value-added tax (VAT), and raising deposit and borrowing rates to control high inflation rates in the market.

The 40th delegation sticks to these monetary and financial reforms witnessed by the Egyptian economy, which eventually led to signing the International Monetary Fund’s $12 billion loan agreement.

The delegation also seeks to achieve gains in the light of the Egyptian-U.S. economic relations by bolstering mutual cooperation, especially in terms of trade volume.

The volume of the U.S. investments in the Egyptian market registered about $23.7 billion in the period from 1970 until now with an investment rate of $515 million annually. This number is relatively lower compared to the U.S. investment in many Arab countries in the last 10 years, including Saudi Arabia, Kuwait, UAE, Qatar, and Iraq.

The Egyptian economy needs to attract more American tourists, as the U.S. market is the first source of tourism worldwide. The number of American tourists who visited Egypt has not exceeded 8,000 in 2016, down from 80,000 entered Egypt in 2010.

There are a number of important files in the delegation’s agenda; the QIZ protocol is first and foremost. Some of the investors in the delegation propose increasing the volume of goods traded within QIZ, as well as adding more companies and regions to benefit from this protocol signed in 2004.

On the level of signing a free trade agreement between Egypt and U.S., many experts believe that it is time to open this file with President Trump, amid expectations of witnessing lengthy negotiations.

The experts also believe that the chances of signing a trade agreement under Trump are greater than in the era of Obama, who preferred to operate in a free-zone style, as an extension of the Democratic Party’s policy.

AmCham’s Anis Aclimandos believes that this visit will achieve more success in the economic file between Egypt and the United States, especially after President Sisi’s successful visit to Washington earlier this month. Aclimandos cited an expected response from the U.S. private sector to the calls of President Trump to develop investment and commercial cooperation with Egypt during the coming period.

Aclimandos is one of the most prominent figures who headed the American Chamber of Commerce. The chamber was able to contribute to correcting the public image of Egypt politically and economically during the years that followed the June 30 revolution. Such efforts were culminated in the approval of the IMF loan along with the historical visit of the Egyptian president to the United States; the first from 9 years ago.

Aclimandos is due to leave the chamber on May 20 after four years of continuous work aimed at strengthening the Egyptian-American relations. He will be succeeded by Tarek Tawfik, Deputy Chairman of the Federation of Egyptian Industries and Managing Director of the International Company for Agricultural Production, on May 21, 2017.

Egypt is now a more stable country in terms of security in the region and the diversity of lucrative investment opportunities available there thanks to the mega projects launched by the government, which raised the rate of return on investment ther, Mohanna added.

The Egyptian economy has many advantages, which would enable it to attract foreign capital during the coming period such as low labour costs, lucrative investment opportunities, diversified mineral wealth, and free trade agreements signed with international trade leaders in various continents. Egypt signed the Greater Arab Free Trade Agreement and the Mercado Común del Sur Agreement with South American countries, which everyone expects to be a major player in world trade in 2025. There are also the cooperation agreements that Egypt has signed with partners from the Asian Tigers and various European countries.