Women are more environmentally-friendly than men, yet they are the most vulnerable to the consequences of climate change, said the European Institute for Gender Equality (EIGE) in 2020 report.

“Those most vulnerable to the consequences of climate change often tend to be women. This is due partly to persistent societal inequalities, whereby women have fewer resources than men to protect against the impacts of climate change.” EIGE report read.

“As recycling adds to the unpaid work done in households, which is still provided disproportionally by women, a move towards a zero-waste lifestyle creates additional pressures on women. At global level, most electronic waste is shipped to low-income countries, where it creates a disproportionate burden on women and children.”

EIGE commented in a note that “consumption is a field highly dominated by gendered practices and associated symbolic meanings based on masculine or feminine identities. In that sense, masculinity is often linked to practices that involve high levels of carbon emissions, while femininity is linked to more caring and thus green behaviour,”

In 2018, market research company Mintel has conducted a study that revealed an eco-gender gap, finding that women care more about the planet than men and are more interested in topics like ethics and sustainability. 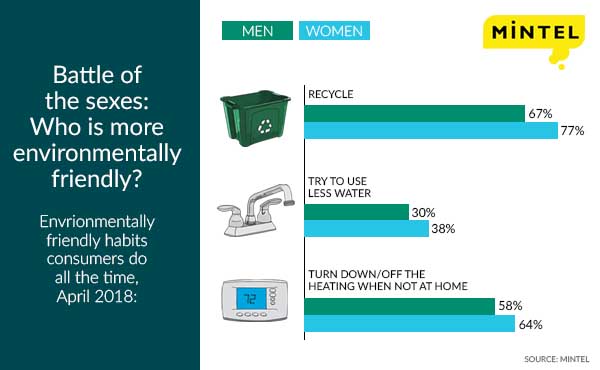 The study of 2,000 Brits showed that 71 percent of women try to live more ethically, compared to 59 percent of men, while 30 percent of British men try to use less water versus 38 percent of women. They found that females (64 percent) are also more likely than men (58 percent) to turn down or switch off the heating when they are not at home.

Meanwhile, another research — led by Sweden-based company Ecoloop in 2021 – revealed that men’s spending on goods causes 16 percent more climate-heating emissions than women’s, despite the sum of money being very similar.

The biggest difference was men’s spending on petrol and diesel for their own cars, the research explained.

The gender differences in emissions have been little studied, the researchers added, and should be recognised in action to beat the climate crisis.

The research compared single men and women in Sweden and found that food and holidays caused more than half of all emissions for both men and women. The scientists discovered that swapping meat and dairy for plant-based foods and switching to train-based holidays, rather than using planes or cars, cut people’s emissions by 40 percent.

The research, published in the Journal for Industrial Ecology, did not include fuel for work vehicles like taxis or plumbers’ vans. Previous research revealed that in families with one car, men used it more often to go to work with women more likely to use public transport.

Holidays accounted for around a third of emissions for both the men and women. “That is a lot more than I expected,” added Kanyama. 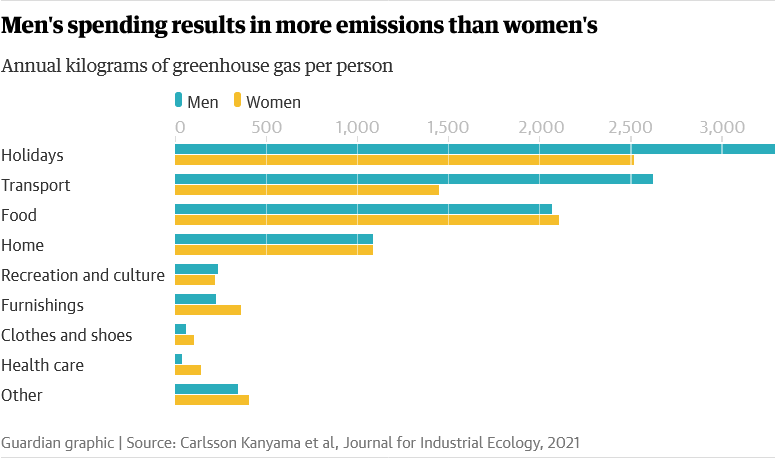 “The climate crisis is one of the key challenges of our time and affects men and women quite differently,” Leonore Gewessler, Austria’s climate minister, told The Guardian in July 2021.

“For instance, the majority of people impacted by energy poverty are women. It is, therefore, crucial to take gender differences into the equation, if we want to develop solutions and a transformation that works for everyone.” Gewessler added.

On transport choices, there is a lack of regular EU-wide gender data, however, individual regional studies illustrate consistent trends that more women than men use public transport — which is more environmentally-friendly than single-occupancy vehicles — and cycle or walk.

A 2013 study in Germany, revealed that regardless of their life situation, women consistently used public transport and walked more than men, who drove more. Among single households, nearly twice the number of men (43 percent vs. 23 percent) use private cars as their main transport.

A 2016 study in Spain revealed that 13 percent of women’s trips were conducted through public transport compared to less than 3 percent of men’s trips. German research from 2019 estimated that 29 percent of women, versus 23 percent of men, would sell their car if it did not meet certain emission standards, indicating that women are more concerned about the environment.

In addition, in a 2022 study, 17.3 percent of men said they considered cars’ carbon emissions “irrelevant”, whereas only 9.7 percent of women said the same.