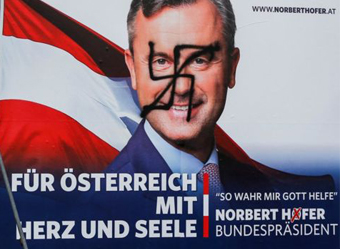 Austrians are voting in a re-run of a presidential election which pits the leader of the far-right Freedom Party Norbert Hofer against former Green Party head Alexander Van der Bellen.

The vote last May was narrowly won by Mr Van der Bellen, but the result was overturned by Austria’s highest court because of irregularities in the count.

If Mr Hofer wins, he will become the EU’s first far-right head of state.

Opinion polls held in November suggest the vote is too close to call.

Although the role is largely ceremonial, the vote is being watched as a barometer of how well populist candidates will do in upcoming elections.

France, the Netherlands and Germany all face elections next year in which anti-mainstream and anti-immigration parties are gaining ground.

The direction in which Austria will take with regard to the EU is also closely watched.

Mr Hofer has campaigned on an anti-immigration platform, and initially said Austria could follow Britain’s vote to leave the EU with a referendum of its own. Mr Van der Bellen has told Austrians it is proof that Mr Hofer is in favour of “Oexit”.

But at a party meeting on Friday, Mr Hofer said opponents who repeatedly accused him of seeking a break with the EU were themselves damaging Austria.

“People who permanently talk about Oexit and accuse others of damaging the country with talk of Oexit should take a look at themselves and think about whether they are the ones damaging Austria the most,” Hofer said.

In April last year, Mr Hofer won the first round of presidential elections by knocking out centrist candidates from parties that have dominated Austria since WWII.

Mr Van der Bellen won the second round, but by just 31,000 votes. The Freedom Party then challenged the result which was then annulled due to irregularities.

The election campaign has been long and bitter, with both men trading insults, and with posters of both being defaced.

In the final TV debate on Thursday, Mr Hofer called Mr Van der Bellen a liar 24 times, and had the insult returned three times, according to the Kurier newspaper.

Austria’s vote coincides with a closely-watched referendum in Italy, where centre-left Prime Minister Matteo Renzi is staking his political future on a package of political reforms that is being challenged by the populist Five-Star Movement of Beppe Grillo.