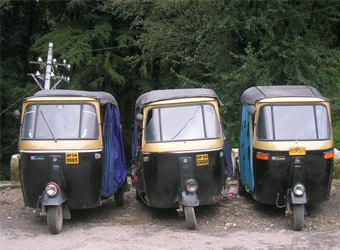 Shares in Bajaj Auto fell more than 4 percent on news that Egypt’s government is proposing a ban on import of motorbikes and three-wheelers, traders said.

Egypt’s cabinet gave authority to the finance ministry on Wednesday to temporarily ban the import of ‘tuk-tuks’, fully assembled motorbikes and their components. The ban is not final yet but is a potential risk to Bajaj Auto’s exports to Egypt, said Morgan Stanley in a note.

The brokerage downgraded the stock to “equal-weight” from “overweight” and cut the price target to 1,983 rupees from 2,124 rupees.

“The Egyptian market is mainly for three-wheeler exports, thus it has high margins. It was also recovering over the last few months – hence it is crucial to F15 export growth assumptions,” Morgan Stanley said.

Exports form 39 percent of Bajaj Auto’s top line (F14E) and within that Egypt formed 11 pct, the note said. If Egypt’s ban plays out, then exports growth assumptions would fall to 8 percent in FY15 from 15 pct currently, it said.