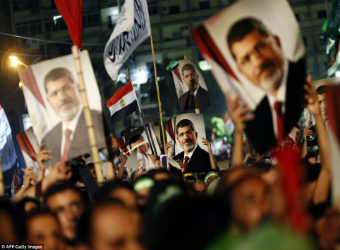 A Cairo court has rejected a lawsuit demanding the suspension of all activities for the National Alliance to Support Legitimacy (NASL), a coalition of Islamic groups including the Muslim Brotherhood which has been rallying for months in support of ousted president Mohamed Morsi.

Lawyer Samir Sabry had previously filed the suit against the pro-Morsi alliance, calling for a halt in all its activities and the closure of its offices on grounds that its members were inciting violence and provoking chaos across Egypt.

However, the Court for Urgent Matters, headed by Bishoy El-Nesr, refused the lawsuit on Thursday, meaning that the NASL is allowed to continue its opposition stance to the military and interim government which replaced Morsi following his ouster in July.

The NASL was founded in June, before Morsi’s ouster, and includes the Brotherhood’s political wing, the Freedom and Justice Party, from which Morsi hails, as well as the centrist Al-Wasat Party, the Salafist Al-Watan Party and the Building and Development Party, which belongs to the ultra-conservative Al-Gamaa Al-Islamiya group.

Last Monday, the Court for Urgent Matters, the same court from Thursday’s ruling, approved the government’s designation of the Muslim Brotherhood as a terrorist group.

The interim government had declared the Brotherhood a terrorist organisation in December but the decision had not been approved by a court until this week.

Since Morsi’s ouster, the Brotherhood has been constantly blamed for militant attacks that have largely targeted security forces, with the exception of a bomb in South Sinai earlier in February that killed three South Korean tourists and their Egyptian bus driver.

The Brotherhood has repeatedly condemned the attacks and denied responsibility.